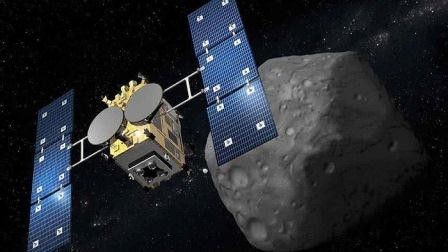 NASA on Thursday successfully launched an unmanned spacecraft on a seven-year mission to chase down a nearby asteroid, collect dust samples and bring those samples back to Earth.

“Flying high above the southern tip of Australia, the OSIRIS-REx successfully separated from the Centaur upper stage [rocket engine], beginning a seven-year mission to travel to the asteroid Bennu and return a sample to Earth,” said NASA spokeswoman Anna Heiney.

The mission is the first time NASA has sent a craft to make contact with an asteroid.

OSIRIS-REx which launched at 2305GMT is expected to intercept Bennu in August 2018. It will the survey the asteroid and search for potential locations to land briefly.

Once an ideal site is found, the craft will touch down for about 5 seconds and collect a sample of the dust and rocks from Bennu’s surface. The instrument used to capture the samples is not entirely unlike a common vacuum cleaner, according to the mission’s team. It will then start a long return trip to Earth and is scheduled to arrive September 2023.

Bennu, which completes an orbit of the sun every 1.2 years, comes within 300,000 kilometers (186,000 miles) of the Earth every six years, making it one of the most accessible “near-Earth objects” (NEOs), according to NASA. Bennu is also one of the oldest known asteroids in the solar system. Many astronomers theorize Bennu may have provided Earth with some of the ingredients crucial to the development of life.

If Bennu did have an effect on life on Earth, NASA hopes the dirt on its surface will provide clues.

In 2010, JAXA, the Japanese space agency, was the first institution to prove a spacecraft could collect dust samples from an asteroid, but the agency was able to retrieve only a few micrograms of material. NASA is hoping to collect much more from Bennu.