US 'outraged' over aid convoy attack 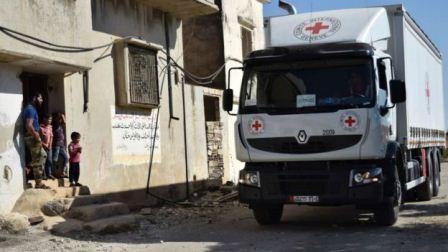 The US government has expressed "outrage" over an attack on an aid convoy near the Syrian city of Aleppo that, a war monitor says, left 12 dead.

The UN has confirmed that the convoy was hit near the town of Urm al-Kubra, without giving details.
But activists say an air strike hit the trucks hours after the army declared a US-Russian brokered truce over.

Meanwhile, Washington says it will "reassess the future prospects for co-operation" with Moscow.
"The destination of this convoy was known to the Syrian regime and the Russian Federation," State Department spokesman John Kirby said.

"And yet these aid workers were killed in their attempt to provide relief to the Syrian people," he added.
The Syrian Observatory for Human Rights, a UK-based monitoring group, said the attacks were carried out by either Syrian or Russian aircraft. Damascus has not commented.

The UN aid chief Stephen O'Brien said if the "callous attack" was found to be deliberate it would amount to a crime.

At least 18 of 31 lorries in the convoy were hit, according to a UN spokesperson. The convoy was intended to deliver aid for 78,000 people.

A witness told the Reuters news agency by phone that about five missile strikes had hit the lorries, which were parked at a centre belonging to the Syrian Red Crescent.

The attack appeared to signal the collapse of the latest effort by the US and Russia to halt the violence in Syria, with the army there saying the deal was over.

"We don't know if it can be salvaged," a senior US official told journalists on condition of anonymity.

"At this point the Russians have to demonstrate very quickly their seriousness of purpose because otherwise there will be nothing to extend and nothing to salvage."

The Syrian military and rebels had already accused each other of violations.

The US and Russia are to hold further talks on the Syrian situation in New York on Tuesday, the state department added.

Aid deliveries to besieged areas were a key part of the cessation of hostilities deal brokered last week.
Supplements were delivered to the besieged town of Talbiseh in Homs province on Monday, the Red Cross said.

But most aid shipments were still waiting to go in.

The UN said it had received government approval to reach all the besieged and hard-to-reach areas where it sought to bring aid.

But access to many areas was still constrained, it said, because of fighting, insecurity and administrative delays.

The truce was dealt a blow on Saturday when warplanes from the US-led coalition against so-called Islamic State (IS) bombed Syrian troops in the eastern city of Deir al-Zour, apparently unintentionally.
Officials said the strikes killed more than 60 soldiers. President Bashar al-Assad called them the "latest example of flagrant American aggression against Syrian army positions in the interests of the terrorist organisation Daesh [IS]".