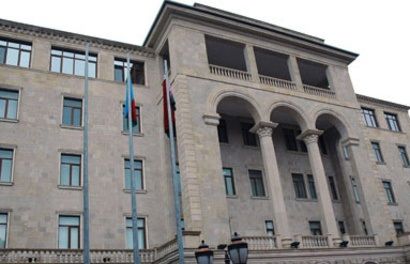 Armenia is constantly disseminating defamatory and false information in order to blackmail international organizations, cast shadow on their activities and undermine confidence in them, the Azerbaijani Defense Ministry told.

Earlier, the Armenian media reported that the Azerbaijani side failed to lead the OSCE mission to its frontline positions during the OSCE monitoring held on May 25.

Azerbaijan’s defense ministry dismissed the Armenian media reports as baseless, noting that the international mission has already confirmed no incident occurred during the monitoring held under the mandate of the OSCE Chairperson-in-Office Personal Representative along the line of contact in Terter on May 25.

“The Armenian side also reported that the monitoring took place according to plan and there was no ceasefire violation. However, the enemy said that the Azerbaijani side allegedly did not lead the OSCE mission to its frontline positions,” the defense ministry added.

It should be recalled that the Armenian side disseminated such provocative information after the OSCE monitoring held in the direction of Chemenli village of Azerbaijan’s Aghdam district on March 1.

The Azerbaijani defense ministry reiterated that in accordance with the monitoring mechanism, international observers are to first establish communications, and then visual contact to determine the time, place and other details, and field assistants are to confirm the completion of the monitoring.