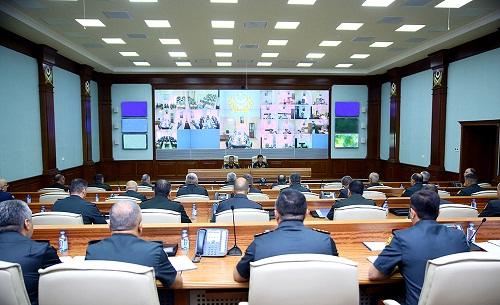 The Minister of Defense of the Republic of Azerbaijan, Colonel-General Zakir Hasanov held an official meeting on September 1.

The meeting that was held with the participation of the deputies of Defense Minister, commanders of the branches of troops, chiefs of the main departments, departments and services of the ministry, as well as commanders of the Army Corpses also involved the commanders of formations stationed in the frontline zone and other responsible officers via video communication.

Once more bringing to the attention of meeting attendants the tasks set by the Commander-in-Chief, Mr. Ilham Aliyev before the Azerbaijan Army, the Defence Minister stressed that the main goal of the held events, taken measures in the army construction, and in general all our activity is a preparation to the liberation of our territories from occupation.

The Minister of Defense analyzed the intensive combat training conducted in the troops, the daily activities and organization of combat operations, the comprehensive provision of service and combat activities, the planning of operational training activities, as well as the current situation in the frontline zone and other places of deployment of the troops, and gave relevant instructions.

At the same time, Colonel General Z. Hasanov defined tasks in connection with the organization and conduct of exercises of various levels, as well as other important events envisaged in the plan, including the readiness of military personnel, logistic facilities, especially posts and positions located in the mountainous region for the winter period.