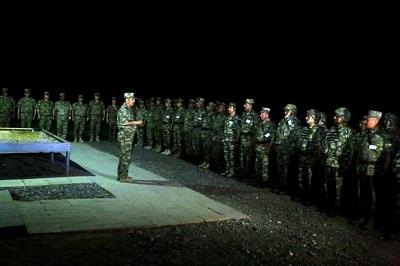 The Azerbaijani army has conducted a live-fire stage of the large-scale operational tactical exercises at night.

At this stage, the troops fulfilled the task of repelling the enemy’s attack at nighttime by delivering counter strikes to the enemy in various directions, and the launching an offensive operation by the Azerbaijani troops.

The troops have improved their skills in organizing and practicing various methods of conducting a modern combined-arms operation throughout the exercises held in difficult conditions of mountain relief and electronic warfare environment, and also other characteristic features determined by the concept of these exercises.

The efficient use of troops and control systems was also provided.

Azerbaijani minister of defense, Colonel General Zakir Hasanov speaking to military personnel at the end of the live-fire stage noted the significance of the exercises.

He highly appreciated the professionalism of the troops and the training of military personnel.

The large-scale operational-tactical exercises kicked off on May 20, in line with the plan approved by Azerbaijani President, Supreme Commander-in-Chief of the Armed Forces Ilham Aliyev.

The exercises involve up to 10,000 military personnel, 150 tanks, other armored vehicles, up to 200 rocket and artillery mounts of different caliber, multiple launch rocket systems, mortars, up to 35 aircraft and helicopters.

The exercises will wrap up on May 24.