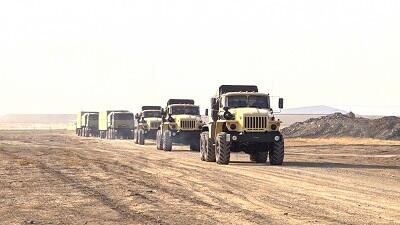 According to the "Coordination Plan of the Nakhchivan Garrison Troops for the 2021 academic year", command-staff training was held in the units.

In the first stage of the exercise, units and units were raised with the "Alarm" signal and taken to the training areas to bring the troops to different levels of combat readiness. The planning of defense and offensive operations by the headquarters in the area was carried out in accordance with military decision-making procedures.

The units of the battalion tactical group involved in practical activities repelled the attack of the conventional enemy and created favorable conditions for the units that attacked by attacking its manpower and armored vehicles.

The last stage of the training was held on the computers of the Simulations Center of the Nakhchivan Garrison with the decisions made, the reality of the reports made, and the activities of the unit commanders.

Using computers, the unit commanders improved the skills of approaching the enemy, providing fire to maneuvering units and agile decision-making in the resulting tactical conditions, using the terrain.

At the end of the training, the activities were analyzed, shortcomings were noted and it was noted that the set goals were achieved.