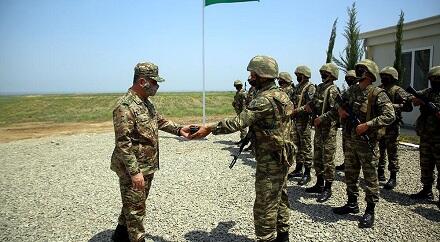 On the instructions of the President of the Republic of Azerbaijan, Supreme Commander-in-Chief of the Armed Forces, Mr. Ilham Aliyev, construction work continues in the military units deployed in the liberated areas.

Checking the level of combat readiness of the personnel, the Minister gave relevant instructions to the command to increase the combat capability.

Colonel-General Z. Hasanov gave relevant instructions to further improve the social and living conditions of the personnel of the military units stationed in the liberated areas.

It should be noted that so far, 20 modules and container-type military units have been put into operation in the liberated areas in various directions.