Jolie is 'bound' to Brad Pitt by Thai tattooist 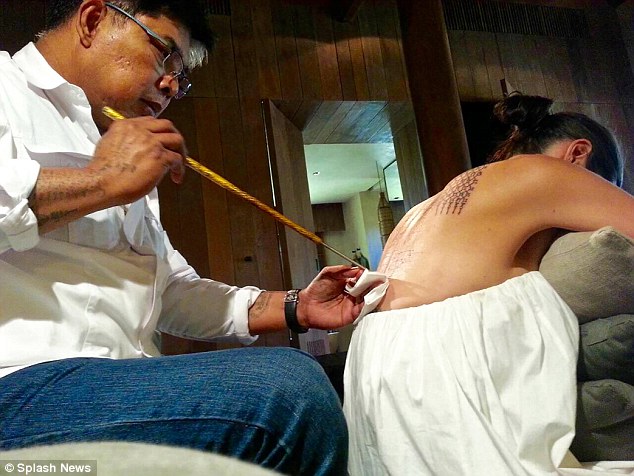 Angelina Jolie had three ‘magical’ tattoos inked on her back during a visit to Thailand to ‘bind her’ to husband Brad Pitt, months before they split up.

The pair split back in September last year after twelve years together, but new photos from February 2016 show Angelina being branded with Sak yant tattoos with Brad, suggesting things were pretty rosy just months before.

The tattoos themselves were applied during a break from filming Netflix’s First They Killed My Father in Cambodia, with ex Thai monk Ajarn Noo Kanpai applying the symbolic ink to the pair.

Angelina’s three tattoos were applied to her back via a number of steel rods mounted with a surgical needle – a process which is more painful but supposedly more accurate than your regular tattoo gun.

Brad was also inked by Kanpai, having a tattoo on the left side of his stomach with a Buddhist symbol.

In a cruel twist of irony, the couple’s tattoos were supposed ‘to symbolically bind them as husband and wife’.

These tattoos join the huge collection of tattoos adoring Angelina, with Kanpai having also applied a shoulder blade tattoo back in 2003.

The former monk’s tattoos are said to cost thousands of dollars, and has worked with a number of other famous faces including model Cara Delevingne and actress Michelle Rodriguez.

Brad and Angelina are currently locked in a bitter custody battle over their six children – Maddox, 15, Pax, 13, Zahara, 12, Shiloh, ten, and eight-year-old twins Knox and Vivienne.

Angelina recently made her first public appearance since her split from Brad to promote the new Netflix movie, which details the war time experiences of her friend and Cambodian human-rights activist Loung Ung as a child.

Speaking in a press conference about the film, she said: ‘I’m deeply honored to have had the chance to work on the film. I hope it reminds everyone that there are little Loungs all around the world today.’