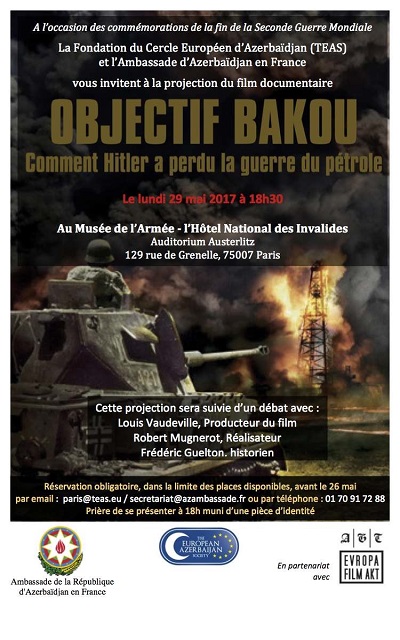 On 29 May, at part of the commemorations for the end of World War II, a landmark documentary about a lesser-known battle of the war was screened in the apposite location of the Musée de l’Armée in the Hôtel National des Invalides, built in baroque style from 1671–78, and home to Napoleon’s tomb. The event was staged with the support of the French office of The European Azerbaijan Society (TEAS), the Azerbaijani Embassy to France and Evropa Film Akt (EFA).

Using digitally restored and colourised archival footage, the film details the bravery of the Azerbaijanis who participated in the war as part of the Soviet army to combat Fascism, with some 300,000 losing their lives. Altogether, 128 Azerbaijanis had the title Hero of the Soviet Union conferred upon them. This new documentary film entitled Objective Baku: How Hitler Lost the Battle for Oil, was produced in 2015 by Louis Vaudeville for CC&C Productions, in collaboration with Baku Media Centre, with the support of the Heydar Aliyev Foundation, and was directed by Robert Mugnerot.

One of the most infamous pieces of newsreel footage to be shot of Adolf Hitler shows him – alongside various members of the Nazi hierarchy – eating a cake in the form of a map of the Caspian area, with the letters B–A–K–U spelled in chocolate cream, topped with a swastika flag. After enjoying the cake, Hitler commented: “Unless we get Baku oil, all is lost.” This was not a mere exaggeration – the oilfields of Baku accounted for 80 per cent of all Soviet resources, being pivotal to the success of the Soviet Red Army, and Hitler even specified the date of 26 September 1942 as that designated for the capture of Baku. The subsequent battle by more than 681,000 brave Azerbaijanis to retain control over their oil fields and combat Fascism was an epic and ultimately successful enterprise.

Marie-Laetitia Gourdin, Director, TEAS France, explained: “This film tells the fascinating story of how Baku fuel helped safeguard the future of Europe – including France. TEAS France is continually seeking to raise awareness of the role of Azerbaijan in achieving the allied victory in World War II. Last year, TEAS France was instrumental in facilitating the erection of a monument to Ahmadiyya Jabrayilov (Ahmed Michel) – known to his brothers-in-arms as Kharko – and other members of the French Resistance at the Mausoleum of Cabertat, near Toulouse. His bravery, particularly during the liberation of the Tarn-et-Garonne region in 1944 was not forgotten, and he was recognised by General de Gaulle, who awarded him the Legion d’Honneur. Furthermore, TEAS Press has published a book on Frenchwoman Yvonne Botto, who married an Azerbaijani member of the French Resistance, and spent seven decades in a remote area of Azerbaijan, being unable to return home due to political reasons under Soviet Union rules.

“Baku played a pivotal and strategic role during World War II, as it was the main source of petrol for the Soviet Red Army. Tonight’s film explores a unique historical moment, and is being presented in collaboration with EFA, organiser of the L’Europe autour de l’Europe festival, which has screened Azerbaijani films in conjunction with TEAS France for six years” – she added.

H.E. Elchin Amirbayov, Azerbaijani Ambassador to France, recalled: “I would like to thank the filmmakers for producing this extraordinary documentary. World War II had a tremendous impact on the whole of Europe, and particularly in France. It is now over 70 years since the defeat of Nazism. The making of this film was a very important initiative, as the seizing of Baku was a great priority of Hitler, although the story is not well-known by the public. Hitler’s Germany had no proper fuel reserves, and he was well aware that Baku was supplying most of the resources for the Red Army. Altogether, more than 600,000 Azerbaijanis fought against Nazism, and a number of these joined the French Resistance – including Ahmed Michel. It is extremely symbolic that tonight’s screening is in the Musée de l’Armée.”

Producer Louis Vaudeville explained his motivation: “I was working on a series on World War II, and came across the incredible story of Baku oil during World War II. I needed evidence, and my researchers scoured the film archives in Azerbaijan, Germany, Russia and the US.”

Historian Frédéric Guelton explained: “The film focuses on the role of the Baku population in combating the Nazis. When Hitler launched his onslaught on the Soviet Union in 1941, he was adopting a policy of Blitzkreig to achieve victory. He had three main objectives – Leningrad, for its ideological significance; Moscow, the capital; and the Caucasus, for its fuel. Hitler knew that petrol reserves were a key to victory in the war, and they needed success on the Eastern Front to gain access to these.”

Irina Bilic, Director, EFA, stated: “The L’Europe autour de l’Europe festival includes the countries comprising the Council of Europe and this classification includes Azerbaijan, which is on the periphery of Europe. Tonight’s film – which shows how Azerbaijani fuel helped safeguard Europe – fits perfectly with the objectives of the festival.”

Entirely comprising archive footage, the film was a revelation for all viewers, outlining Baku as the birthplace of mechanised oil extraction and how the wealth of the city led to its appellation as the ‘Paris of the Caucasus’, where the streets were filled with fashionably-dressed people, and the buildings were reminiscent of those in Stockholm, Paris, Moscow and Warsaw.

The film then went on to demonstrate the role of Baku fuel in the Soviet Union and the challenge for Nazi Germany, which only had oil reserves near the Polish border. It outlined the relative success of the Nazi armed forces in 1940, which saw the swastika hoisted over the Eiffel Tower, but still the only success that brought fuel for the Wehrmacht and Luftwaffe was the victory over Romania.

Throughout, the film particularly demonstrated the bravery and resourcefulness of Azerbaijani women, whether as welders on pipelines; as infantry personnel; or as munitions workers. General de Gaulle was seen meeting Soviet premier Joseph Stalin in Moscow, and the film ended with footage of Victory Day in Baku in 1945, juxtaposed with contemporary, independent Baku – a modern, clean, calm, city, replete with extraordinary architecture.

The audience comprised over 70 viewers, with historians, diplomats and experts on Azerbaijan, and the question-and-answer session covered such topics as the uses of newsreel footage, which was inevitably shot for either Soviet or Nazi usage; the role of the film in supplanting a gap in historical knowledge; and the essential role of fuel as a catalyst for war and in achieving victory in mechanised warfare.

The film is not yet available on DVD, but was presented in Baku in May 2015, and has since then been broadcast on several European channels, notably RMC Découverte and National Geographic.