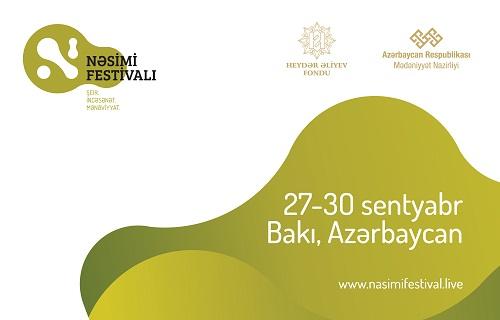 Nasimi Festival of Poetry, Arts, and Spirituality set to start in Azerbaijan for the first time on September 27.

Axar.az reports that Festival lasts until on 30 October.

The festival, dedicated to the work of Imadaddin Nasimi (1369-1417), one of the brilliant poets and thinkers of the East, is aimed at glorifying and perpetuating his poetry and art.

The festival is being implemented under the organization of the Heydar Aliyev Foundation and support of Azerbaijan’s Ministry of Culture.

Poetry of the great Imadaddin Nasimi, who lived six centuries ago, is peculiar not only in its brilliant skillfulness but also in its deep sense and convincing sincerity, calling everyone to plunge into thoughts about the mystery of being and to look into the deepest layers of the soul.

The festival will be held under the slogans “Beyond the limited self”, reflecting the philosophical views of the poet, and “I am a particle, I am the sun” which are the poet’s lines.

The program of the large-scale event covers various types of art and knowledge fields. During the festival, programs will be organized in various places in Baku, as well as in Shamakhi, the native city of the poet.

On the first day of the festival, participants will visit the Shahendan cemetery in Shamakhi city, where Shahendan, the brother of Imadaddin Nasimi, as well as outstanding poet Seyid Azim Shirvani, were buried.

The participants will also visit the Juma Mosque built in 743, one of the most ancient mosques in the Caucasus, the Pir Omar temple in Avakhil village and the Shamakhi History and Local Lore Museum.

Poetical and musical gatherings will be held in Shamakhi before Nasimi’s monument, as well as an event with the participation of the winners of a literary contest dedicated to the memory of Imadaddin Nasimi and held by the Ministry of Culture as part of “The Word” literary project.

At the contest, young poets will present works inspired by the genius of Nasimi. As part of the festival, Azerbaijani folk musical compositions and musical works calling for spirituality will be performed.

The opening of the International Ethical Design event - “Sensitive Fashion” will also take place in the Meysari village in Shamakhi district.

The event created on the basis of content published systematically during the last few years in the Baku magazine under the heading “ECO. Fashion Route”, will carry out the functions of informing and educating about environmental sensitivity in production of clothing and interior items, reproduction, restoration of forgotten and outdated traditional methods and production technologies, and will also serve as the showroom and the sales salon.

The works of Azerbaijani and foreign designers will be presented there. The exhibition will showcase the styles of clothing that were used in Azerbaijan for centuries, clothes decorated with various national ornaments that were in vogue in different periods of time.

Then, an evening of acoustic and electronic music called “Closer to Stars” will be held at the Shamakhi Astrophysical Observatory named after Nasraddin Tusi of the Azerbaijan National Academy of Sciences (ANAS).

On the same day, after demonstration in London, Paris, Berlin, Moscow and Tbilisi, the exhibition “Live Life” will be presented at the Heydar Aliyev Center in Baku, organized at the initiative of vice president of the Heydar Aliyev Foundation, the founder and the head of IDEA (International Dialogue for Environmental Action) Public Association Leyla Aliyeva.

The exhibition is aimed at drawing attention to environmental problems, nature protection, as well as educating the public about the role of art in this field.

The “Hurufiyya” exhibition of the UAE-based Barjeel Art Foundation in the Heydar Aliyev Center will consist of 26 paintings and graphic works. These are works by contemporary artists living in a number of Arab countries that represent a stream called “hurufiyya” (images based on letters, calligraphy), widely spread over the past 20 years. The exhibition will also feature several works by Honored Artist of Azerbaijan Tarlan Gorchu.

Then the program will continue with a musical and video art installation called “77 million paintings” by the creator of the ambient music genre, prominent UK composer Brian Eno. Prior to this, this work was demonstrated in Tokyo, London, New York, Buenos Aires, Barcelona, Sydney, Mexico City, Cape Town, Rome and other cities.

The official opening of the event will take place in the Heydar Aliyev Center. Thus, on the evening of September 28, as part of the concert program, the Center will feature Nasimi poetry, excerpts from Azerbaijani folk music.

Young and middle-aged composers will present their new versions of the composition of outstanding Azerbaijani musician of the 13th-14th centuries Abdulgadir Maragayi for the ensemble of old musical instruments “Echo of the Ages” under the Azerbaijan National Conservatory, as well as “The Legend of Nasimi” by the brilliant composer Fikrat Amirov, the song “Prayer” written to the words of Nasimi by Honored Artist of Azerbaijan Tunzalya Agayeva.

Also, the famous UK singer and composer of Azerbaijani origin Sami Yusuf will perform at the concert.

This day of the festival will end in the Chamber and Organ Music Hall with the presentation of the “Cycle” music project of honored artists of Azerbaijan Rain Sultanov and Isfar Sarabski, glorifying spirituality and eternal values. In this project, Sarabski, along with the piano, will perform jazz organ music.

Also on September 29, musicians from different countries in the form of collective improvisation will perform the work “From the Seven Days” (“Aus den sieben Tagen”) by the prominent German composer Karlheinz Stockhausen in the Shirvanshahs’ Palace.

The composer, without writing a single note in the work, considered it his task to write texts that inspire performers from a spiritual point of view. Musicians, having read these texts, freely improvise and get inspiration from both the author’s work and from each other’s performances.

The placement of musicians not in one, but in different, remote from each other corners of the palace personifies the knowledge of truth in solitude. With the help of modern communication tools, these individual performances will be combined, and will be broadcast live online.

The Stone Chronicle Museum will host a video lecture titled “Emphatic civilization and shared economy” by world-famous US economist Jeremy Rifkin on September 29, and then a question-and-answer session will be held.

The Stone Chronicle Museum will also feature the “Bahariyya” music performance inspired by the works of the immortal Nasimi.

On the same day, the DanceAbility inclusive dance group will perform at the Seaside National Park. During this performance, which resulted from the three-week rehearsals of DanceAbility Azerbaijan, dancers, which also include people with disabilities, will share the joy of self-expression in their dance.

These dances will bring to the Baku Boulevard the spirit of Nasimi’s philosophy, consisting in seeing a man as the highest and perfect creation.

September 30, an idle industrial warehouse in the Gala township of Baku will host presentation of the urban art project titled “The Expanding Wall.” About 10 Azerbaijani and foreign urban artists will participate in the project and will create their works on the walls of the building. They include artists from the US, South Africa, Brazil, Belgium, Spain and France.

Children and adolescents, directly observing the process of the works’ creation, will also draw under the guidance of masters of fine arts. Students of the Azerbaijan State Academy of Fine Arts will subsequently portray these sketches on the walls of the building on a large scale.

On the same day, the Gala Archeology and Ethnography Reserve will host introduction with the works created as part of the project “Waste - to Art” and “Music of Stone”, a concert program consisting of children and teenagers of the famous Recycled Orchestra of Paraguay (an orchestra of musical instruments created as a result of waste recycling).

During the festival, the fusion of art and captivating charm of Icherisheher (Baku Old City) will allow guests to make a journey through ancient Baku. Exhibitions, installations, video projections will be showcased in Icherisheher, poetry and music samples will be heard, and theatrical performances will be shown.

Imitative poems written to Nasimi’s lines will be presented to spectators in narrow streets and alleys of Icherisheher in an unusual way - for example, in the form of calligraphy on the walls, or in the form of sound recording, and even being “animated” on some landscape by using the QR code technology.

At the end of the festival, the winners of the poem contest dedicated to the memory of Imadaddin Nasimi will be awarded in the Baku Media Center as part of “The Word” literary project of Azerbaijan’s Ministry of Culture.