Actor on stage after 4-year break 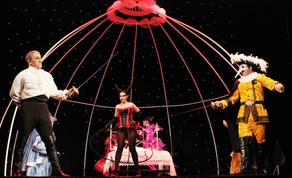 Fakhraddin Manafov who played the role of Casanova answered questions of journalists before performing on stage.

Young actress Yegana Huseynli who played the role of Anna Bobberman said it was a great pleasure to share the stage with F.Manafov.

The director and musical designer is Ilgar Safat, the production designer Mustafa Mustafayev.