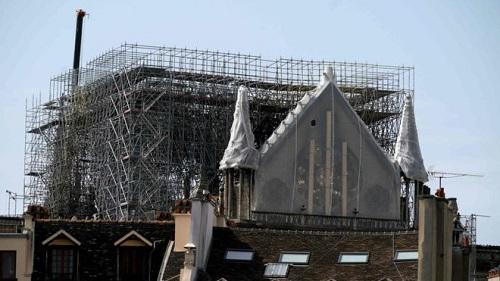 Soaring drone footage has shown large sheets of temporary roofing being hauled over Notre Dame Cathedral to protect it from the elements.

Axar.az reports citing Dailymail that, engineers have been seen this week working on cranes and in harnesses to shore up the church's defences after it was ravaged by a ferocious inferno which stunned the world on April 15.

French President Emmanuel Macron has pledged to rebuild it within five years and France has launched an international competition for the reconstruction of the cathedral's 19th-century spire, which collapsed into the nave during the blaze.

However, more than a thousand French and international architects have warned Macron his rapid plans risked building quality with a 'political agenda.'

In a column published by French newspaper Le Figaro on Monday, they urge Macron to 'let historians and experts have the time for diagnosis before deciding on the future of the monument.'

They call for a well-considered, thoughtful and ethical approach and warn against a 'political agenda' based on speed.

France's government last week presented a bill aimed at speeding up the reconstruction of Notre Dame that would allow workers to skip some ordinary renovation procedures.

A survey on Tuesday revealed a majority of French people want it restored exactly the way it was, with just a quarter backing a modern 'architectural gesture.'

French MPs are scrutinising the new law which would relax tender and some heritage rules to help speed the restoration, and are likely to start debating it on May 10, a source said.

The law would also give tax advantages to donors and set up a public body to oversee and carry out the work.

Jean-Claude Bellanger, who heads up the Compagnons du Devoir association, alerted the French government in the wake of the fire that there was a lack of manpower in the building trade, which could slow down Notre-Dame's reconstruction.

Bellanger said the organisation's partner companies are facing a shortage of about 100 stonecutters, 100 masons, 150 carpenters and 200 roofers.