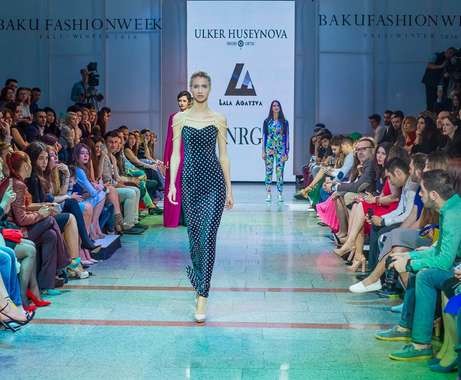 The second day of Baku Fashion Week Fall /Winter 2016, one of the most expected fashion events in the city, was held on May 16.

The event organizers, including the head of the modeling Agency FMS Models, Lyubov Gutorova, the head of the "Production Center of Hafiz Agayev" Hafiz Agayev, General Producer of the international channel ID Fashion Vasily Klimchuk, and fashion catwalk director of the BFW Nina Draco spared huge efforts so that the BFW once again turned into a celebration of style and fashion.

The evening was attended by famous fashion designers, bloggers as well as representatives of business. The well-known Turkish model and actress, Touche Sarikaya, was the host of the event.

Honorary guest of the event was famous fashion designer Gulnara Khalilova. The designer stressed that the BFW became a bright event in the fashion industry of not only Azerbaijan, but the entire region.

"For some, fashion Week is a holiday, for someone- a business event and others it's a platform to realize their ideas and desires. However, what is most important is that it brought together various people, who feel in Baku like at home," said Khalilova.

Baku International Marine Station was the venue of the most expected fashion event.

The second day was held under the national motives of Ukraine and Azerbaijan.