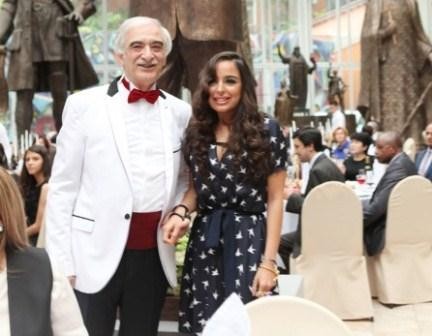 A solemn ceremony has been held at the Museum Exhibition Complex of the Russian Academy of Arts to present a bronze statue of Azerbaijani Ambassador to Russia, People's Artist Polad Bulbuloglu.

"Many people ask me to make their statue but I do not agree because there should be image and character in the sculpture. Polad Bulbuloglu is a creative personality. He continues the traditions of the great nation he belongs to and his father, genius Bulbul's creative path. This should be appreciated," he said.

Tseretli noted that Polad Bulbuloglu's statue, which he presented him on the occasion of his jubilee, was placed among the bronze monuments of the world's most famous personalities.

In her interview with journalists, Vice-President of the Heydar Aliyev Foundation Leyla Aliyeva hailed the statue as a sign of great respect and esteem to history and culture of the Azerbaijani people.

USSR People's Artist Tahir Salahov said that Zurab Tsereteli put in this statue his love and respect to not only for his friend Polad Bulbuloglu, but for the whole Azerbaijani people and government.

People's Artist of Azerbaijan Polad Bulbuloglu said that it was a spectacular event for each creative personality that his work won high praise.

"There is a huge gallery of portraits and statues of famous creative people in Zurab Tsereteli's exhibition complex. The gallery features the statues of prominent musicians too. I am proud that a statue of an Azerbaijani national will also be among those statues," Polad Bulbuloglu added.

The ceremony was attended by heads of diplomatic missions of foreign countries accredited in Russia, well-known scientists and cultural figures.