"Inspector" comedy to be staged after 64 years 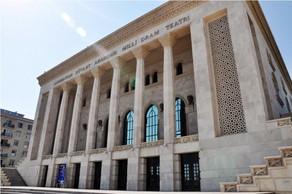 Final rehearsals of 'Inspector' comedy by N.V.Gogol are being held at Academic National Drama Theatre.

It was told by stage director Mikayil Mikayilov, the premiere will be in June.

The performance was dedicated to the 70th anniversary of People's Artist Rafael Dadashov.

Notably, the work of art, which has been staged in Azerbaijan in different years, was produced by well-known producer Mehdi Mammadov at Academic National Drama Theatre.

The spectacle, performed in 1952, dedicated to the 100th anniversary of N.V.Gogol and translated into Azerbaijani by Sabit Rahman.