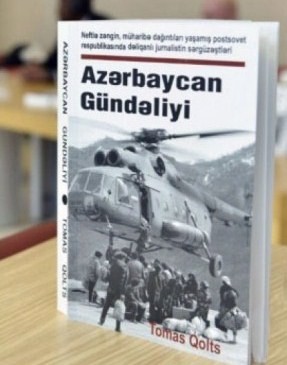 An Azerbaijani version of “Azerbaijan Diary” book by well-known American author and journalist Thomas Goltz has today been launched at ADA University on May 24.

Speaking at the presentation ceremony, Goltz said that in 1993 it was very difficult to imagine that Azerbaijan could have become what it is today. He noted that the book provides an insight into the first years of Azerbaijan`s independence, saying he met with national leader Heydar Aliyev in Nakhchivan at that time.

Rector of ADA University Hafiz Pashayev said Thomas Goltz was one of a few people who supported Azerbaijan at its difficult times. The rector described the book as “a precious” source for those who want to study modern history of Azerbaijan.

Deputy head of the US mission in Azerbaijan Derek Hogan said the largest part of the book highlighted the Armenian-Azerbaijani Nagorno-Karabakh conflict. He noted that the book was translated through collaboration between the Embassy and ADA University.

The book is the record of Goltz`s experiences when he was detoured in Baku in mid-1991.