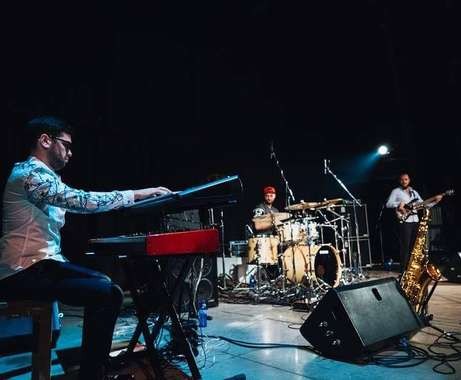 The interesting and unusual improvisations of Azerbaijani band captured the hearts of many guests. The concert was broadcasted via the First Georgian channel. The event ended with the performance of a march "Azerbaijani soldier", that was warmly received by the audience and followed by standing ovation.

The trio was founded on April 15, 2016. Before that time, each member of the team tried out in different styles and directions of music, which allowed to successfully unite the result in one new project!

“Kavkaz Jazz ” is a non-commercial youth jazz festival, in which young musicians from different countries take part. First “Kavkaz Jazz” festival was held in 2010. Along with classic jazz, most of musicians actively use traditional instruments in their performances. It's is a unique project and differs from other jazz festivals by being also educational. The festival also stipulated a joint training program of famous American jazz saxophonist and teacher Jamie Ebersolda as well as a two-week educational program of the Tbilisi State Conservatory on June 1-14.

The festival, organized by NGO Art Bridge, with the support of the Ministry of Culture and Monument Protection of Georgia and Tbilisi City Hall attended by musicians from Azerbaijan, the United States, Iran, Turkey, and other countries.

Gala concert of the Jazz Festival kicked off at the fortress Rabati.