Azerbaijani delegation in the GITEX-2016 exhibition 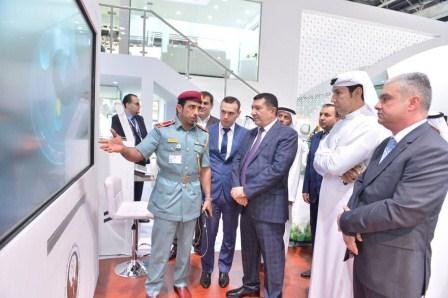 An Azerbaijani delegation headed by chief of the State Migration Service Firudin Nabiyev has participated in the 36th GITEX Technology Week (GITEX-2016 exhibition) in Dubai.

On the sidelines of the exhibition Nabiyev met with Director-General of the General Directorate of Residency and Foreigners Affairs, Dubai Emirate, Mohammed Ahmed Al Marri.

Nabiyev hailed relations between Azerbaijan and the United Arab Emirates.

He said reciprocal visits of Azerbaijani President Ilham Aliyev and Vice President and Prime Minister of the United Arab Emirates, and Emir of Dubai Sheikh Mohammed bin Rashid Al Maktoum have played an important role in elevating relations to the current level.

A video presentation on the activity of the General Directorate of Residency and Foreigners Affairs was demonstrated after the meeting, followed by a question and answer session.

Then the Azerbaijani delegation familiarized themselves with the activity of the General Directorate.