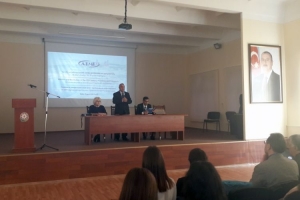 The 3rd international scientific and practical conference, titled “Tourism and recreation in the 21st century: problems and perspectives”, kicked off in the Azerbaijan University of Tourism and Management on Saturday.

Axar.az reports citing to APA that delivering a keynote speech at the conference, the acting rector of the university, Eldar Aslanov, said that along with the training of personnel, the higher education institution attaches great importance to carrying out scientific research in the field of tourism and organizing a meeting of local and foreign scientists to exchange views.

According to him, as in all spheres, the development of tourism should be based on science and research.

Aslanov added that scientists from five countries–-Azerbaijan, Turkey, Russia, Bulgaria and Georgia–-will present at the conference 33 reports on various spheres of tourism.