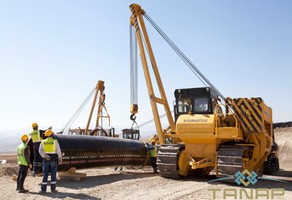 As a part of the Trans-Anatolian Pipeline (TANAP) project, designed to supply Azerbaijani gas to Turkey and further to Europe, until now pipe length of 900 km delivered on the territory.

According to the Anadolu Agency, Director General of TANAP Hussein Saltuk Duzyol said.

S. Duzyol noted that welding works completed on the 480-kilometer stretch of the pipeline with total length of 1334 km from the Turkish-Georgian border to Eskisehir.He recalled that in the framework of the project to date has signed agreements worth a total of 4.5 bln USD.

TANAP Director General noted that the drop in oil prices in the world market had a positive impact on TANAP project:"Sharp decline in investment in the oil and gas sector in many countries due to the economic stagnation and the fall in world oil prices has created favorable conditions for the TANAP project.Initially, the project was estimated at 11.7 bln USD, now expenses decreased by 2.5 bln USD to 9.2 bln USD."

TANAP is a pipeline, which will transport the gas, produced within development of second phase of Azerbaijan's 'Shahdeniz' field in the Caspian Sea, to Turkey and then to Europe. TANAP, which is a branch of the Southern Gas Corridor project is being constructed in the territory of Turkey. The pipeline will connect with Trans-Adriatic Pipeline (TAP), designed to transport Azerbaijani gas to Europe through Turkey-Greece border.

On March 17, 2015, groundbreaking ceremony of the TANAP has been held in Kars, Turkey with participation of Azerbaijani, Georgian and Turkish presidents. Initial capacity of the pipeline, which is planned to be put into operation in 2018, will be 16 billion cubic meters per year. About 6 billion cubic meters of this gas will be transported to Turkey, the remaining to Europe. The TANAP pipeline will have two starting point in Eskisehir, Turkey and in Thrace. The sale of gas in Turkey will be carried out by BOTAS company. The total length of the pipeline is 1 850 km. 19 km section of the pipeline will pass through the Sea of Marmara.