"Azerbaijan's role is crucial in this project" 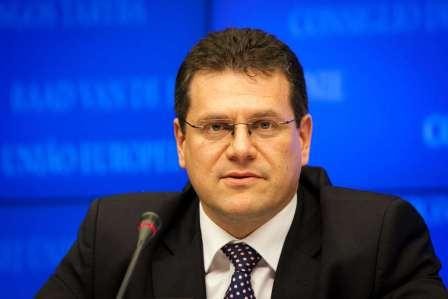 The Caspian region will play very important role for the energy security of Europe, the EU Commission Vice-President for Energy Union Maros Sefcovic said in an interview with Trend.

“All our strategic documents refer to the Southern Gas Corridor as a very important diversification route, because we see it is a true diversification,” he said.

“Therefore we are very supportive of this project,” he said.

He noted that the Southern Gas Corridor project was included into the list of the EU projects of common interest, which get the priority treatment in the European Union.

“We, of course, are following the construction of this pipeline very closely and we have been encouraged to see that everything goes according to the schedule, that Caspian gas could arrive in Europe even earlier that it was expected,” Sefcovic said.

He added that the roles of Azerbaijan and Turkey in this project are absolutely crucial.

The regular Advisory board meetings on the Southern Gas Corridor allow monitoring the progress in the implementation of the project and any difficulties and complications, so that they can be resolved as quick as possible, according to Sefcovic.

Today the Southern Gas Corridor is among the European Commission’s energy projects, which aims at the diversification of the EU gas supply sources and routes. Azerbaijani gas in considered as the main source for that project.

The Southern Gas Corridor, which envisages the transportation of gas from the Caspian region to the European markets, has been included in the European Commission’s PCI (projects of common interest) list.