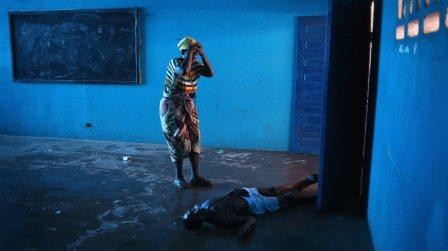 One mutation. A simple tweak in the Ebola gene — a C got turned into a T. That's all it took to make Ebola more infectious during the West Africa epidemic, scientists report Thursday.

Two studies, published in the journal Cell, found that a single mutation arose early in the epidemic. It allows Ebola to infect human cells more easily than the original version of the virus — way more easily.

"The largest difference we saw was about a fourfold increase in the number of cells infected," says Jeremy Luban, a virologist at the University of Massachusetts Medical School, who led one of the studies. "When you're talking about a virus that could kill you, this is a pretty scary number."

When Ebola appeared in West Africa late in 2013, it spread faster and further than any previous Ebola outbreak. One reason was because it hit densely populated cities. And countries in West Africa didn't have the tools to stop the epidemic.

But early on, computational biologists at Harvard University also noticed the virus was changing. It's genes were mutating.

That's not surprising, Luban says, on its own. It's what viruses do, especially when they first start spreading in people.

The computational biologists were stumped. They could see the mutations, but they didn't know what they did.

So Luban — and another team led by Jonathan Ball at the University of Nottingham in the U.K. — started experimenting with the mutations in the lab. Quickly one mutant jumped out as peculiar. So Luban set up a video conference call with the Harvard biologists.

"I remember, we asked them, 'So what's significant about this particular mutation?' And they all started jumping up and down," Luban says.

The Harvard team got excited because they had been watching this mutation. It cropped up in the outbreak when there were only a hundred or so cases in the Guinea. And then it spread like gangbusters.

It went to Sierra Leone, Liberia. It showed up in Nigeria, Mali. And then it came here to the U.S., Luban says.

"It's the form of the virus that made its way to an emergency room in Texas," he says, when Thomas Eric Duncan brought Ebola to Dallas from Liberia.

Although the mutant appears to be more infectious than the original version of Ebola, Luban and his colleagues don't know if it makes the virus more deadly.

Luban has some evidence that it's linked to an increase in mortality rate. "But that increase is very, very slight. So that alone doesn't prove anything," says Vincent Racaniello, a virologist at Columbia University, who wasn't involved with the studies.

Also, all the experiments have been in cells with a model of the Ebola virus. Racaniello says. So the findings need to be confirmed in animals, with a real virus.

Besides, he says, we stopped this mutant. The outbreak is over. There hasn't been a case of Ebola in months.

"That [mutant] virus, as far as we know, it's not circulating anymore. It's not causing infections anymore in people in West Africa," Racaniello says.

"As far as we know that virus is gone," he says.

Why? Because here's something I forgot to mention about the mutant virus: The same mutation that helps the virus infect human cells more easily also prevents it from infecting animal cells. So the mutant virus probably can't hide in bats — or other animals — and threaten to trigger another outbreak.

In other words, once the epidemic in West Africa was over, so was this mutant.