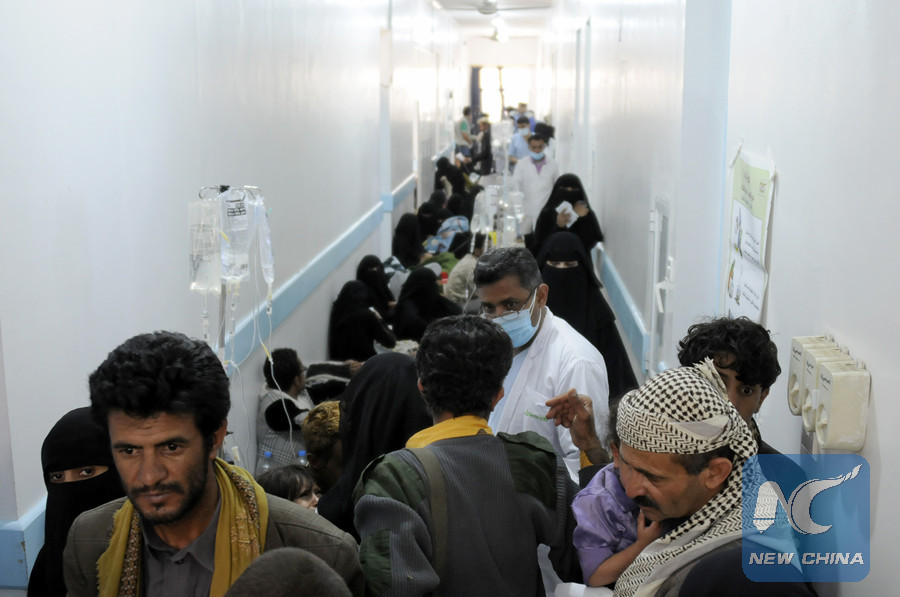 Yemen's Ministry of Public Health and Population on Sunday night declared a public health emergency in the capital Sanaa as a result of the spreading cholera epidemic, which has killed 115 people so far since April 27, the country's state news agency Saba reported late on Sunday.

"This declaration came after the cholera epidemic spreads across the capital's districts and neighborhoods," the health ministry said in a statement cited by Saba.

The ministry sent an urgent call to all international and local health organizations to help address the worsening situation, in which the ministry said that the situation "is threatening with an unprecedented health and humanitarian disaster."

The International Committee of the Red Cross (ICRC) warned Sunday of a very serious cholera outbreak in Yemen as hospitals are struggling to cope with increasing numbers of patients.

At a press conference in Sanaa, the ICRC Operations Director Dominik Stillhart said more than 8,500 suspected cholera cases have been reported in 14 governorates of Yemen from April 27 to May 13.

"Unfortunately, 115 people have died from cholera (during this period). This is extremely serious," he said.

"The conflict has taken a very serious toll on the water supply, the health system, the sanitation system as well as the economy and that all are about to collapse," he added.

The cholera outbreak in Yemen was first announced by Yemen's Ministry of Public Health and Population on Oct. 6, 2016.

The World Health Organization has warned the healthcare system in Yemen is on the verge of collapse as many hospitals have shut down. It said only 45 percent of Yemen's hospitals are operational at the moment, but are facing shortages of supplies and staffs.

Late last month, the ICRC's director for the Middle East, Robert Mardini, said the ICRC is stepping up its operations and doubling its budget for Yemen this year to 90 million U.S. dollars.

Yemen, the impoverished Arab country in the southern tip of the Arabian Peninsula, has been involved in a civil war since two years ago.

The capital Sanaa and most of the northern provinces are under control of Houthi rebels.

The war has killed more than 10,000 people, half of them civilians, and displaced over 2 millions, according to humanitarian agencies.