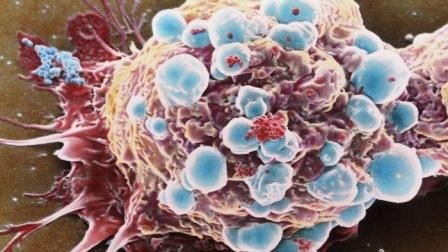 Australian researches believe "starving" cancer cells could be the key to prevent the growth of tumors, paving the way for the development of new cancer-beating drugs.

Scientists at the Australian National University (ANU) in Canberra announced the breakthrough on Friday, in which they found and blocked a vital "supply route" that cancer cells use to obtain nutrients and grow.

Professor Stefan Bröer from the ANU Research School of Biology said his team identified the "gateways" through which cancer cells "feed", blocked them and then found the cells almost completely stopped growing, in a discovery which could revolutionize chemotherapy and save lives.

"This should lead to chemotherapy with much less serious side-effects, as normal cells do not use glutamine as a building material," Bröer said in a statement released on Friday.

"Crucial white blood cells, which current treatments damage, could be spared, and it could cut out the hair loss that chemotherapy causes."

He said that most cancer research undertaken currently is focused on one particular strain of cancer cell, whereas his team`s discovery could be used to stop the growth of hundreds of different cancer types.

"This is likely to work in a wide range of cancers, because it is a very common mechanism in cancer cells," Bröer said.

He added that his team initially identified one "gateway" which it blocked by disabling the cells` "glutamine transport mechanism," but the cancer found another way to feed on nutrients. The team then found and blocked a second gateway and the cancer cells stopped growing.

Lead author Angelika Bröer, also from ANU Research School of Biology, said cancer research was improving in leaps and bounds as technology gets better, with the ANU team to use robots to test "thousands" of potential cancer stopping drugs for their ability to successfully block the gateways.

"It is an exciting time to do cancer research. We now have precision tools in our hands to manipulate the genome of cancer cells, allowing us to address problems that were difficult to solve previously," Bröer said.

"We have developed a set of tests which make it very easy to determine if a drug is targeting glutamine transporters."

"This means we can set robots to work and that will test tens of thousands of drugs for us over the next year or two."