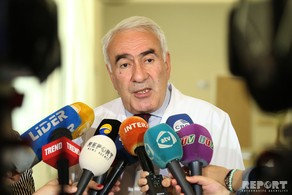 Azerbaijan continues work on introduction of new vaccines. Vaccination against chickenpox is planned in the future, and further against meningitis and rotavirus."

According to him, a number of vaccines used in the world is not perfect: "We expect the production of a vaccine against chickenpox in the latest technologies. In compliance with all the rules of treatment, the chickenpox is not a serious problem for health, but the vaccine may have implications. We are waiting for the vaccine that will not create further complications."

N.Guliyev added that as soon as the new vaccine will be put into production, Azerbaijan will begin vaccination against chickenpox, which would be the 12th in the country: "In general, vaccination can be carried out against about 25 diseases. In the future can be launched vaccinations against meningitis and rotaviruses. Other vaccines are not in use in the world."

Chief pediatrician noted that the vaccine against rotavirus is currently being improved: "These vaccinations have complications in the form of intestinal infestations. Therefore, in some countries, including Azerbaijan, they are not applied."