Vitamin D supplements `advised for everyone` 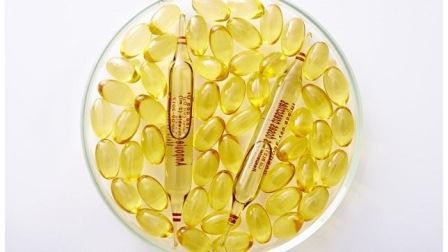 Everyone should consider taking vitamin D supplements in autumn and winter, public health advice in England and Wales says.

It comes as a government commissioned report sets the recommended levels at 10 micrograms of the vitamin a day.

But officials are concerned this may not be achievable through diet alone, particularly when sunlight, which helps in vitamin D production, is scarce.

Low vitamin D levels can lead to brittle bones and rickets in children.

Limited amounts of the vitamin are found in foods such as oily fish, eggs and fortified cereals.

But, for most people, the bulk of their vitamin D is made from the action of sunlight on their skin.

And official estimates suggest one in five adults and one in six children in England may have low levels.

Now, an extensive review of the evidence, carried out by the Scientific Advisory Committee on Nutrition (SACN), suggests everyone over the age of one needs to consume 10 micrograms of vitamin D each day in order to protect bone and muscle health.

And public health officials say, in winter months, people should consider getting this from 10 microgram supplements, if their diet is unlikely to provide it.

Its main function is to regulate the amount of calcium and phosphate in the body, which are vital for the growth and maintenance of healthy bones, teeth and muscles.

In extreme cases, low levels can lead to rickets in children - where the bones become soft and weak and misshapen as they continue to grow.

But there is a balance - too much vitamin D can lead to high levels of calcium in the blood which can cause heart and kidney problems.

Anyone with a chronic condition or taking medication should seek advice from their doctor.

Meanwhile, children aged up to four should take supplements each day all year round, as should babies under one year - unless they already consume this in infant formula.

Prof Peter Selby, at the University of Manchester, welcomed the advice.

He said: "In particular, it dispels any doubt of the place of vitamin D in the maintenance of bone health and should ensure that all people will now be encouraged to receive vitamin D to reduce their risk of bone disease and fracture."

For example, people whose skin has little exposure to the sun, or who always cover their skin to go outside, should take the supplements throughout the year.

Black and Asian people should also consider the supplements all year round.

Dr Louis Levy, head of nutrition science at Public Health England, told BBC Radio 4`s Today programme: "This is a change in advice, previously we have said that babies from six months to five years should have a supplement and only those people at risk of deficiency should take a supplement.

"Previously we felt that everybody would get enough from the sunlight.

"This is new advice based on evidence looked at over the last five years."

He said those who apply sunscreen in the way the manufacturer recommended would not make vitamin D.

"When you go out, you do need to have short bursts without sunscreen and make sure that you don`t get sunburnt," he said.

Separately, health officials in Scotland and Northern Ireland say they have updated their guidance in line with the new recommendations, but only for people aged over six months.

They are currently considering whether to extend the advice to babies from birth.

It also looked at studies suggesting Vitamin D levels might have an impact on cancers, cardiovascular disease and multiple sclerosis but found there was insufficient evidence to draw any firm conclusions.