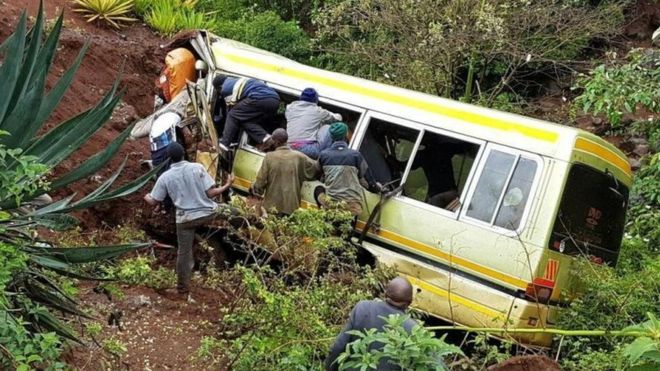 More than 30 people - almost all of them schoolchildren - have been killed in a bus crash in northern Tanzania, officials say.

Axar.az reports citing to BBC they say the bus plunged off the road in a steep ravine near the town of Karatu.
A number of people were hurt. Officials later tried to remove survivors and dead bodies from the vehicle.

The students from a primary school in Arusha were travelling to another school to sit an exam.
The final year pupils from the Lucky Vincent school - believed to be aged between 12 and 14 - were on their way to take mock exams when the accident happened on Saturday morning. Two teachers and the driver were also killed.

President John Magufuli said the accident was a "national tragedy".
"This accident extinguishes the dreams of these children who were preparing to serve the nation, it is an immense pain for the families involved and for the whole nation," he said.

Regional police commander Charles Mkumbo told Reuters that "the accident happened when the bus was descending on a steep hill in rainy conditions".
"We are still investigating the incident to determine if it was caused by a mechanical defect or human error on the part of the driver," he added.