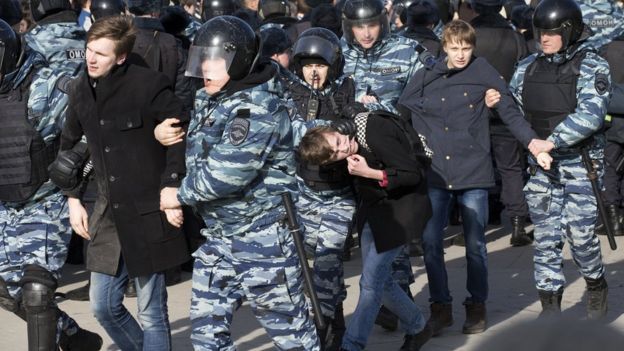 Four minors have been detained during an unauthorised event in the Russian capital on Saturday and are currently being transported in a police van to an unknown destination, according to the ombudsman for children's rights in Moscow, Evgeniy Bunimovich.

Axar.az reports citing foreign media that police reportedly used megaphones to urge protesters at the Pushkinskaya, one of Moscow's busiest squares, to refrain from violating public order and blocking passage for other people. Some of the protesters were wearing black masks, the reporter added.

"I was told that there were four minors in one of the police vans, but I have no information on where they are being taken to. When I figure out where they are, I'll start looking into it. They were detained at Pushkinskaya [square in central Moscow]", Bunimovich said.

The event was initiated by the Libertarian party over some candidates being excluded from the Moscow city council elections. The organizers rejected to hold the rally at the location proposed by the city authorities and instead called on people to walk through the circle of boulevards and squares around Moscow's historical center.