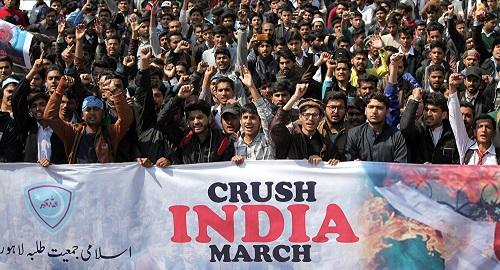 The marchers, mainly belonging to Jamiat Ulema Islam-Fazl (JUI-F) party -- one of the country’s main religious parties -- led by former opposition leader Maulana Fazl-ur-Rehman set out the final leg of their “Azadi (Freedom) March” from Lahore to the capital on Tuesday.

Chanting anti-government slogans and waving Pakistani and party flags, the protesters riding on hundreds of buses, cars and motorbikes, are expected to reach the capital on Thursday.

“Our demands are very clear. The prime minister should step down to pave the way for fresh general elections without interference from any institution,” Qari Usman, a key leader of the JUI, who is also participating in the march, told Anadolu Agency over the phone.

Though, the government and the opposition parties have agreed on a code of conduct for a “peaceful” march, political analysts, however, foresee a showdown between the security forces and the marchers in the capital.

“We will not come back without prime minister’s resignation,” Usman said, adding: “We cannot say how long we sit there (in Islamabad). We will announce our next strategy in consultation with other opposition parties in Islamabad.”

Premier Khan has already warned of a strict action if the marchers do not abide by the agreement with the government.