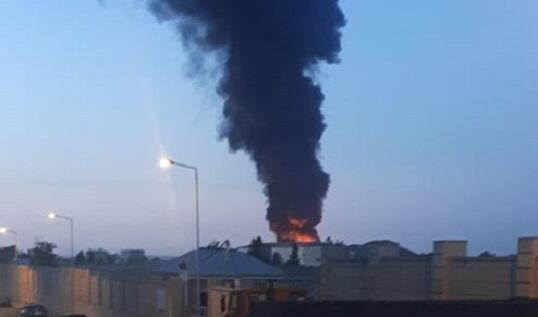 A fire broke out in Baku.

Axar.az informs that, the incident took place in Binagadi district.

An explosion was heard several times during the fire. A large number of fire brigades were called to the scene.

Fire departments of 4 districts of Baku were involved in the area. Several ambulances were brought to the area.

The Ministry of Emergency Situations has set up a headquarters in the area of ​​the fire. The fire broke out in an area of ​​700 square meters, the headquarters said.

32 vehicles and 160 personnel of the State Fire Protection Service were involved in the area.

State Fire Service technicians arrived at 20:12 and the first fire truck arrived at the scene at 20:19.

Currently, Deputy Minister of Emergency Situations Etibar Mirzayev is in the area of ​​the fire.

According to new information, the head of the Baku City Executive Power Eldar Azizov also arrived at the scene.

The Ministry of Emergency Situations continues to take urgent measures to extinguish the fire at the Sobsan paint factory located in the Binagadi district of Baku.

At present, the Minister of Emergency Situations, Colonel-General Kamaladdin Heydarov is at the scene.