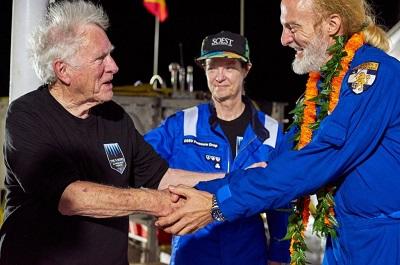 An American explorer has found plastic waste on the seafloor while breaking the record for the deepest ever dive.

He spent four hours exploring the bottom of the trench in his submersible, built to withstand the immense pressure of the deep.

He found sea creatures, but also found a plastic bag and sweet wrappers.

It is the third time humans have reached the ocean's extreme depths.

The first dive to the bottom of the Mariana Trench took place in 1960 by US Navy lieutenant Don Walsh and Swiss engineer Jacques Piccard in a vessel called the bathyscaphe Trieste.

Movie director James Cameron then made a solo plunge half a century later in 2012 in his bright green sub.