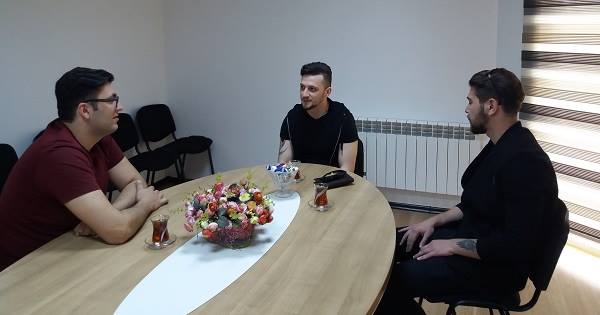 Axar.az presents an interview with first Azerbaijani Youtuber who investigates paranormal places and activities and shares video in his Youtube channel "SECTOR 6".

– My name is Ramil Ashrafov and I am Nijat Khalilov.

– To whose mind did this idea come first?

– It came to my (Ramil Ashrafov) mind first. I was alone at the beginning. Now we are 3 people in our team.

– First our name was “I See Monsters”. But we have changed its name because it was like a cartoon name, it was hard to find and other issues. After that I chose the name “Sector” from “Mortal Kombat” game. And 6 is the number of devilish powers.

– It was an abandoned hospital which was quite famous in Baku and people were afraid of going there. I am a skeptic person and wanted to show people that there is nothing like they think. I went there 1 or 2 months ago. It has a spooky view from outside and its atmosphere catches you so you feel worried and a little bit frightened at first. But once you come over your fear and enter the building alone this feeling wipes out. Also, you know that everything is recorded by the camera and your followers will see things that you see. It also helps to get rid of the fear. But still you can’t get out of the atmosphere. If you stay in an abandoned place alone for 5 minutes you will hear voices and microphone records all voices. But there are also some sounds which could not be recorded by microphone. Nevertheless, you hear all of them. (Video can be watched from this link)

– You told that you heard voices. Did you feel scared when you were hearing these voices?

– As I mentioned before, I am a skeptic, I don’t believe in such things. If there are some sounds or voices I tell my analysis about it, what can cause this sound. It is an abandoned place, cracking down day by day, pieces from walls can fall down on to the floor or it can be sound of the wind travelling through pipes or corridors, animals running or hiding in the rooms. But there were foot sounds in this hospital. There were hit sounds but I thought skeptic about them, they can be stone or some other materials. But foot sounds can not be caused by animals or materials. I tried to analyze it from scientific point of view, but could not prove it. I don’t know what was that. I take all risks – I know what am I doing and I am ready to take all risks. There are some places in Azerbaijan to which expeditions were sent but none of them came back. I am planning to go to these places also. But I will keep their names confidential for the security of my followers. – What was the scariest experience you had?

– During our project in an abandoned laboratory Rake creature attacked me. Adrenaline level reached at its peak at this moment. (Video can be watched from this link)

– Can you talk about your project in this laboratory?

– It is an abandoned laboratory which was used in Soviet times. You know things were a little bit messy and controversial in this period. Nazis were not only ones who were doing experiments on people. Soviet regime was also holding experiments in these secret labs. It was acting under “Chemistry and Biology factory” name. People rarely went there. It was 2 am when I was recording and walking in the corridors. When I entered a big hall I saw blood and pieces of flesh on the floor. I thought it was done by dog or some other animal and went close to record it. I tried to warn people that there are dogs and they can attack you, don’t come here. When I went closer I started to hear strange and creepy sounds. I wasn’t an animal or human voice, very unusual, like a mix of human scream and swine voice. When I turned to the direction where voices were coming from I saw two pairs of shining eyes. I could observe human body shape but they were walking on their feet and hands. I attacked me and I ran away from there. I have seen videos about Rake in the internet, but I was skeptic about it till the moment I met them. Now I accept that there are dangers, but I accept the danger. After finishing all places here in Azerbaijan, I will go to the abroad and continue my project with most dangerous and spooky places of other countries.

– Even “Dyatlov Pass” and Chernobyl?

– Yeah I will visit the Dyatlov Pass. It is located in Mount of Death. Hollywood has produced a movie about it, but that does not make sense. Everything can happen there, but the point is tongues and eyes of group members were removed in reality. I want to go and record it as a reality, not like a movie. And Pripyat of Chernobyl. I understand that this area is a radioactive zone. That’s why despite having troubles, I found a Geiger counter and electromagnetic indicator. I take into account the danger, but I will go till the end. But courage is not enough, I need financial support. And another problem is permission for entrance to the buildings here.

– Was there anything that you did not see during your walk, but realized after watching it again?

– Maybe there are some moments but we could not find. Once a follower saw a smiling face in the video which I did not see during my walk. He has commented on video and after that I have checked and saw that he was right. We are giving people simulation, make them feel the same feelings we were feeling in this building by recording like FPS. They see what I see.

– Is there any place that you hesitate to visit?

– There is only one place in Asia. It is a jungle. There is no connection, compass does not work, electronic devices do not work and there happened a lot of crimes. Even plants do not grow normal. In Azerbaijan one place that I hesitate to visit. It is a tunnel in the mountain located in the North of Azerbaijan and none of 4 expeditions which were sent there came back. I am keeping this place for my season final in Azerbaijan.

– Human can get a heart attack, diabetes or any other sickness when they get scared. Aren’t you afraid of such things?

– I come from a family which is made up of servicemen and doctors. I have read from books and they taught me a lot of things. I know that when you get scared adrenaline increases very quickly and you have to move to spread the adrenaline. If you do not move it will affect your internal organs and even can kill you.

– Have you ever had a sleep paralysis?

– Only once when I was working at night shift. I wanted to sleep and saw shadows in the darkness. I went toward these shadows and they disappeared.

– Do you believe in haunted or cursed dolls or other objects?

– No, I don’t believe in such things. I can believe only if I will take it and examine it myself. I don’t believe, demon, devil or something else. Believing in devil and SpongeBob is the same thing.

– What about UFOs and aliens?

– You know we are not alone. We haven’t seen even Jupiter and have no idea about other universes or systems. Not believing aliens would be idiotic. Thinking that we are alone in the universe is egoism. Each planet has its own habitants. But no one reveals it.

– Area 51 and other secret regions. What would you do if you could enter to these areas?

– I know and believe that such areas exist. And also I believe that whatever scientists do there are for our favor. Generally religious people oppose scientists but if they did not do discoveries, we could not live like that nowadays. And if I could get into one of these areas I would not share anything about it. It is like author rights. If they wanted it to be revealed, they would have revealed it before me.