An hour with Ambassador - Interview with Mr. Zacharie Gross 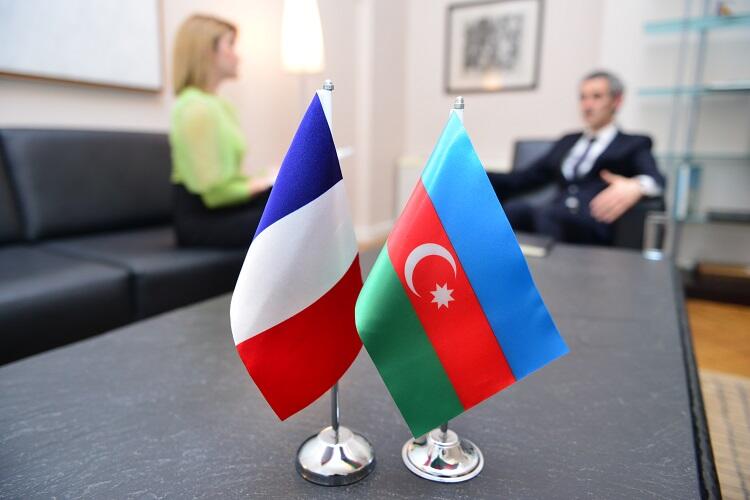 Axar.az presents the interview with Extraordinary and Plenipotentiary Ambassador of France to Azerbaijan Zacharie Gross:

– Mr. Ambassador, has your impression toward Azerbaijan changed particularly from the expectations you had before coming to the Country?

– The expectation was seeing a lot of camels, men with the kinjals, but I didn’t see any so I am very disappointed! I’m just joking. More seriously, I was not expecting the country to be so oriented towards Europe. Many Azerbaijanis say they feel partly European. That was a pleasant surprise. Also I was not expecting so many Russian speakers. In fact a lot of people in Baku are bilingual, and they speak Azerbaijani, Russian and many also speak English. That was something I was not expecting.

– There are many differences between French and Azerbaijani culture, traditions and way of life. Is there anything that you find unusual and strange about Azerbaijan?

– I was surprised by the driving. I think people have got used to Formula one here! That’s how they drive (laughs). What is different? I think people are very respectful in Baku, in Azerbaijan. In France, perhaps less. Respectful, in a good way. So that’s very pleasant. Positively, there is also less advertisement. In Paris, France there is enormous pressure of advertisement everywhere, on buses, buildings, metro, TV and newspapers, but here it’s more relaxed. These are just a few examples of differences.

– How would you describe Azerbaijan-France relations with three words? 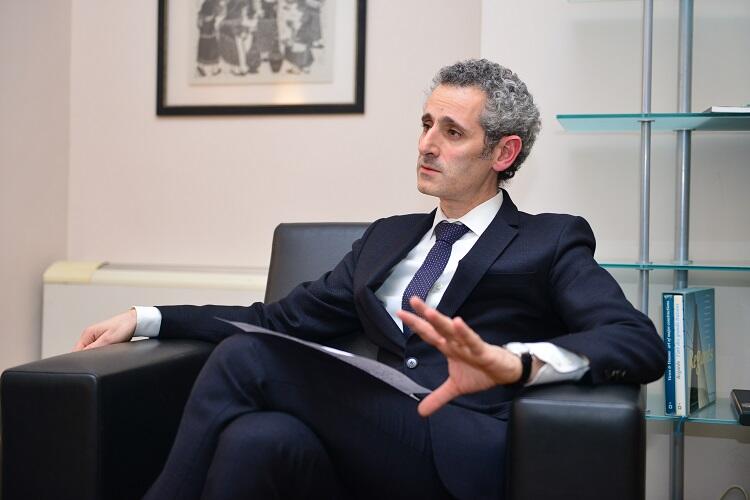 – France was one of the first countries to recognize the independence of Azerbaijan. This decision of the official Paris in December 1991 was of utmost importance for newly independent Azerbaijan. MR. Ambassador, how do you evaluate the dynamics in the development of the political relations between the two countries since then?

– We have very strong political dialogue since the beginning. President Heydar Aliyev chose France as the destination of his first international visit. Presidents Sarkozy and Hollande both visited Azerbaijan. President Ilham Aliyev went to Paris in 2018 and 2019. In 2019 the First Vice-President met the French Prime Minister in Paris. And last summer, the French Minister for the Economy and Finance visited Azerbaijan. We have strong political dialogue. On the economic side I must say the cooperation is not as much as we expect. Perhaps that’s one area in which we should develop our relations more. On the educational side, we have very good relations. We have very good projects and dynamics. We used these dynamics to create a new French Lycée in Baku, which has 200 pupils, and a fantastic French-Azerbaijani University (UFAZ), which has nearly 600 students.

So as I said. Diverse, friendly and strategic.

– Yes, France imports five times more than Azerbaijan. We would like to better balance this trade relation, which would mean more French exports. In 2019, French-Azerbaijani trade grew by more than 20%. I think French companies can bring a lot of diversification in Azerbaijan’s economy. So we have identified a number of key sectors such as transport, environment, safety, bilateral investments, agriculture, and energy of course. So these are the main sectors. These companies can bring diversification because of their technology, human resources, procedures that they implement. They are at the highest international standards. They can bring a lot to Azerbaijan to have a new generation of well-trained, young engineers, experts, businessmen. I think they can also deliver improvements in the lives of Azerbaijanis. This means for example improving metro transportation, urban transport, the quality of life. There is a lot of water loss in Baku or Sumgait for instance. Water evaporation, flows, leaks from the canalization. French companies can improve water distribution for everyday life of Azerbaijanis, also for smart agriculture…. There are a lot of companies that are active in Azerbaijan, and ready to work here – in aviation and satellites sectors for instance. Space technologies and satellites are key for the everyday life in contemporary societies. So these are just a few examples. 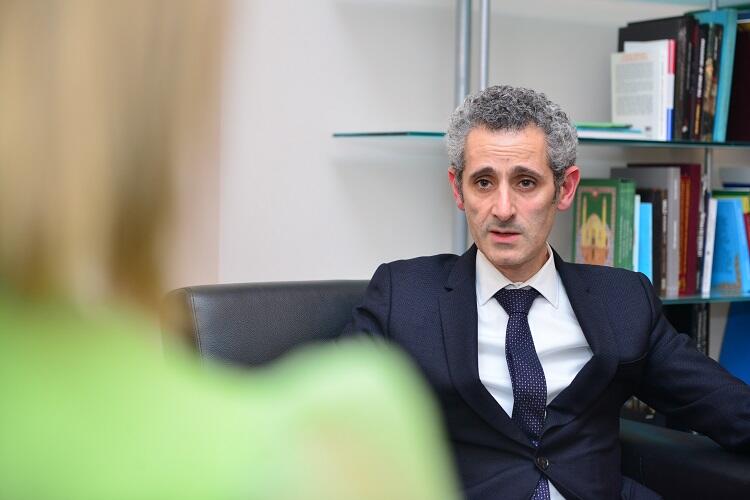 – France is one of the co-chair countries of the OSCE’s Minsk group that engaged in resolving the Nagorno-Karabakh conflict. After the meeting of the Ministers of Foreign Affairs, the peace-building process has started, and journalists from both sides visited each other’s countries. What are your views on what happens? Especially, if we take into consideration the fact that there is a strong Armenian diaspora in France? What are the perspectives on the resolution of the conflict?

– Well, I think exchange of journalists is important. It’s important to prepare population for peace. And an exchange of journalists is a part of that, it is part of knowing the country you negotiate with. You have to know how these countries are changing, evolving… I think your foreign minister Mr Mammadyarov correctly says that it’s a “step by step” process. So there are steps like this and also such as prisoner exchange, which can be important. I believe in diplomacy. As long as there is diplomacy and it is ongoing now, it is active, then we can move towards conflict resolution and peace. And I am hopeful. There is goodwill on the side of the three co-chairs, and neutrality, obviously. And so if Azerbaijan and Armenia want to move forward in 2020 then this could be a good year for resolution of this conflict. Concerning the French government’s position – it’s well-known that there is no difference between the positions of three co-chairs.

– The French Police were harsh in treating the participants of the yellow vests movement. Dozens of protestors and journalists were detained. Don’t you think it threatens democracy? How do you think - what should be the limits of democracy?

– No, I don’t think that the yellow-vest movement was a threat to democracy. I think it was an expression of democracy. Lots of French people have strong views about French government and they expressed their views for weeks and months. There were demonstrations across much of France. And these demonstrations were allowed to take place. So, that’s an expression of democracy. We have representative democracy in Parliament. We also have freedom of expression and freedom of assembly. There was … violence, yes unfortunately. We have seen the images on the Television, etc. There was violence on the part of a small proportion of demonstrators. And possibly there may have been some cases of police violence. But in both sides we had a judicial process. When there was violence from the demonstrators, arrests were made. But these arrests were made according to the law. In possible cases of police violence, there have been investigations by specialised units of the police and by the Ministry of Justice. And such cases may be transferred to the courts and then the courts will decide. The courts are independent. Therefore if there was any abuse, that will be treated according to the law. So I don’t think the democracy was threatened, I think on the contrary it shows the resilience of French democracy despite the difficulties. 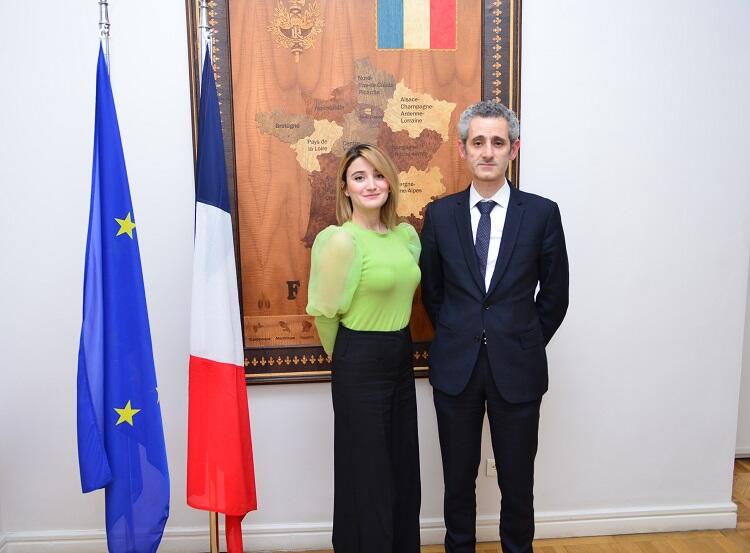 – Emmanuel Macron’s remark on NATO’s brain death was received ambiguously by the world leaders. What do you think? How will be the stance of France about this organization now and in the future?

–There was a need to have a strategic dialogue amongst allies. And I think that article is worth reading because that interview is very substantial and enabled a very active discussion at the NATO Summit in London. And NATO Allies came out of this Summit stronger. Because it allowed discussion on what the challenges are, where the threats are, who the adversaries are, starting with terrorism. There was an agreed text at the end of this Summit; which shows that there is unity. Now there is an active process to pursue the discussions engaged by the French President about European Security challenges and how the European Allies in NATO should meet these challenges.

– Recently, we observe the normalization in the relation between Emmanuel Macron and Putin. Can it be regarded as a result of the US sanctions on Iran and the Ukrainian crisis?

– I’m not sure normalization is the right word. The relaunch of the French dialogue with Russia is simply the recognition of the fact that Russia is in Europe and that Russia is both a partner and, sometimes, a threat, but it’s not an enemy. And therefore we need to try to solve in a pragmatic way a number of challenges we have, such as the conflict in Ukraine and Nagorno-Karabagh and other important issues like nuclear arms control and non-proliferation. Russia is also an important factor in Syria and the Middle-East. We are working together with Russia to try to resolve the Iran nuclear issue and to deescalate tensions in the Gulf. This comprehensive dialogue could be the beginning of a successful process. But we go into this dialogue without naivety, with clear views regarding French and European interests. And we will defend our interests as NATO allies in this dialogue with Russia.