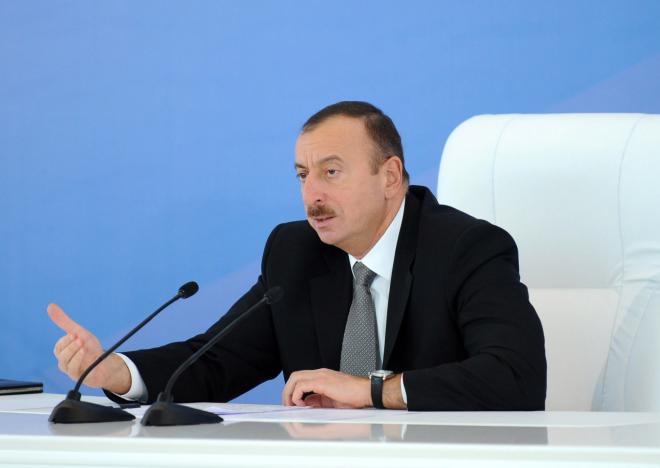 Ilham Aliyev said settlement of the Nagorno-Karabakh conflict is the key priority for Azerbaijan’s foreign policy.

Axar.az reports that, settlement of the Nagorno-Karabakh conflict is the key priority for Azerbaijan’s foreign policy, country’s President Ilham Aliyev said in a New Year speech. “Settlement of the Azerbaijan-Armenian, Nagorno-Karabakh conflict is the main priority of our foreign policy. I can say that during the [2016] year our political and diplomatic positions were even more strengthened. The conflict must be settled in line with Azerbaijan’s territorial integrity. There is no other way,” Aliyev said on Saturday. He also pointed out that the status quo in the conflict was unacceptable for Azerbaijan.
Azerbaijan Violates Karabakh Ceasefire 30 Times on Saturday – NKR Defense Ministry Azerbaijan's Armenian-dominated breakaway region of Nagorno-Karabakh proclaimed its independence in 1991. After the military conflict ended in 1994, Azerbaijan lost control over the region. Violence erupted in Nagorno-Karabakh on April 2, 2016 and led to multiple casualties. The parties to the conflict signed a Russian-brokered ceasefire on April 5, but mutual accusations have not stopped so far.

On May 16, Armenian President Serzh Sargsyan and his Azerbaijani counterpart Ilham Aliyev met in Vienna to discuss the conflict. The sides reiterated there could be no military solution to the conflict and reaffirmed their commitment to 1994 and 1995 peace agreements. The presidents also agreed to finalize the Organization for Security and Co-operation in Europe’s (OSCE) investigative mechanism as soon as possible to reduce the risk of further violence. On June 20, the presidents of Armenia, Azerbaijan and Russia met in St. Petersburg where they reaffirmed their commitment to achieve steady progress in political settlement of the Nagorno-Karabakh conflict and agreed to increase the number of OSCE monitors working in the conflict zone.