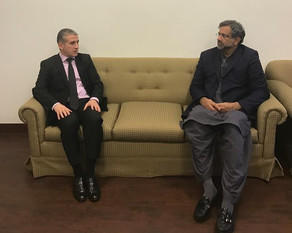 Axar.az reports citing the Azerbaijani Embassy to Pakistan, in the meeting, satisfaction was expressed with further development of relations between the two countries, visit of Pakistani PM to Azerbaijan at the end of last year.

The Ambassador said that works are underway in the direction of increasing economic and trade relations along with other areas, visit of economy delegation from Azerbaijan to Pakistan in coming months, according to instructions of the head of state.

Development of energy and transport cooperation, improvement of contract-legal framework, efforts to increase trade turnover between the two countries, implementation of issues arising from outcomes of the meetings of the joint intergovernmental commission, realization of mutual visits were also discussed in the meeting.

Sh.Kh.Abbasi stressed that Pakistan is interested in further developing relations with Azerbaijan and increase of efforts by the joint intergovernmental commission in this regard.