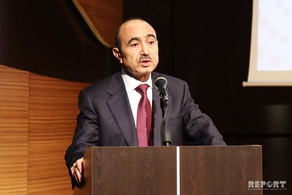 March 31 is a such event that should involve Azerbaijan's national elite. We must deliver March 31 events to future generation'.

Ali Hasanov, Assistant to the President of the Republic of Azerbaijan on Public-Political Issues said in the presentation of the publications of Science Development Fund on Armenia's aggression and territorial claims against Azerbaijan.

He said Armenians committed genocide against Azerbaijanis for more than 200 years: 'Everyone in Azerbaijan is aware of March 31 genocide. Armenians were supported by reactionary circles to occupy Azerbaijani territories. Armenians committed March 31 genocide with the support of the great powers. Leading by Shaumyan's forces, they killed tens of thousands civilians in Baku and other regions. Murdering tens of thousands people for interest of a state shows essence of that state. For the first time, national leader Heydar Aliyev officialized genocide against Azerbaijanis as a generalized event. Thus, March 31 genocide made official. Dozens of villages destroyed in Azerbaijan in 1905-1918'.

A.Hasanov said at present, the policy pursued by Azerbaijan yields its results: 'As in all areas, Azerbaijan supports development of history in recent years. Numerous events have been held with the support of Heydar Aliyev Foundation and its head, MP Mehriban Aliyeva. Initiated by Leyla Aliyeva, Vice President of the fund, considerable work has been done within 'Justice for Khojaly' campaign, the international community informed on the genocide. We must inform the whole world about the Armenian aggression against Azerbaijan.

Azerbaijan is a country of multiculturalism. There is tolerance in the country. Azerbaijan is an example of coexistence of multinational states'.

The UN, Council of Europe, international organizations, establishing relations between states, should control states as Armenia. They should be required to respond in the world and in their countries for the crimes, committed by them. Relations of such countries with their neighbor states should be in the center of attention. Activities of the regime, which occupied Azerbaijani lands, caused people to live in tents should be assessed. People, states considering this state as a strategic partner, intending to be social, political and economic partner must think, if such regimes may be cooperated with?'