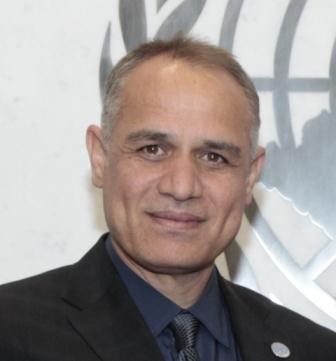 The newly appointed United Nations Resident Coordinator and the United Nations Development Programme (UNDP) Resident Representative in the Republic of Azerbaijan Mr. Ghulam M. Isaczai on Wednesday presented his credentials to the Ministry of Foreign Affairs.

Mr. Isaczai brings over 22 years of work experience in international development, humanitarian emergencies and post-conflict recovery with the United Nations system and international NGOs in Asia and the Middle East. He has led and managed programmes in poverty alleviation, good governance and rule of law, environment and disaster management as well as volunteerism and civil society engagements.


Previously, Mr. Isaczai served as Senior Advisor and Country Director, ad interim, in UNDP Tajikistan and UN Resident Coordinator and UNDP/UNFPA Resident Representative in the Democratic People's Republic of Korea (2013-2015). Prior to that, Mr. Isaczai was Chief of the Development Division, United Nations Volunteers in Germany (2008-2013). From 2005 to 2008, he was Deputy Resident Representative in UNDP’s office in Nepal. From 2003 to 2005, he worked as Senior Programme Advisor for the Disarmament, Demobilization and Reintegration Programme under UNDP and UN Assistance Mission for Afghanistan (UNAMA). Mr. Isaczai was Assistant Resident Representative and Head of Governance Portfolio in Yemen (2001-2003) and Senior Programme Officer (2000-2001) with the Office of the U.N. Special Coordinator for the Middle East (UNSCO), Syria. From 1997-1999, he worked with the U.N. Office of the Humanitarian Coordinator for Iraq (UNOCHI) in Baghdad and the Kurdish region of Iraq. Prior to joining the UN system, Mr. Isaczai had worked in the private sector in the United States (1993-1995) and held positions in Pakistan with international NGOs such as Save the Children (USA), Freedom Medicine and Swedish Committee for Afghanistan (1986-1990).