“We have a proposal“ 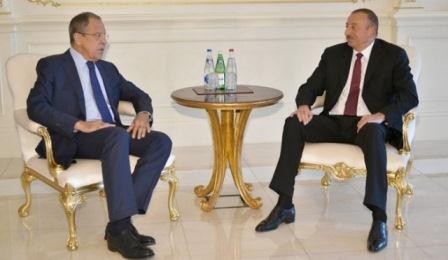 "My visit is a result of your agreement with the presidents of Russia and Iran. Your initiative was to establish a trilateral format, which is important, as you rightly said, from many points of view: from the perspective of closer trilateral political cooperation, security cooperation in the fight against terrorism," said Russian Foreign Minister Sergei Lavrov at a meeting with Azerbaijani President Ilham Aliyev.

According to him, the two countries have common interests to enable geo-strategic, geopolitical situation in the interests of transport routes for development of economic ties and energy cooperation, "And I hope that tomorrow, guided by your agreement with President Putin and with President Rouhani we will be able to create a political framework that will allow the sectoral ministries more specifically to work on the implementation of the relevant transport and energy projects. A separate meeting is considered with my colleague tomorrow, and we will be guided by the agreement in principle, which you have reached with President of Russia Vladimir Putin, when he was on a visit to Baku in June last year. BY the way, he sends warmest greetings and reminds that you have an invitation to visit Russia. Of course, it is self-sufficient direction of our foreign policy."

Lavrov said that the process of settlement of the Nagorno-Karabakh conflict faced a serious challenge: "In view of the circumstances, you have mentioned - the resumption of hostilities, which is probably for the last many, many years the most massive. We are, indeed, and at the level of the president, and at the level of the Prime Minister, at the level of our ministry, and at the level, of course, the Defence Ministry and the General Staff have undertaken everything necessary to help the parties reach an agreement on a cease-fire. We are ready to help ensure that this agreement will not be violated. It is important to calm the situation in this particular issue, more actively - I hope the events of recent days will push us to it - to engage in a political settlement. We have a proposal that we, together with the co-chairs are trying to involve more actively in order to achieve an agreement between Azerbaijan and Armenia. I hope that we will be able to pay attention to these issues in the medium-term, long term, and talk about that today and tomorrow. We fully support the initiatives that are now undertaken by the co-chairs. They visited Baku. Tomorrow they will be on the line of contact, the day after tomorrow - in Yerevan. And we think with the help of the OSCE, and of course, not only the OSCE, but also the International Committee of the Red Cross, it is important to have the confidence to take action as soon as possible and to create the necessary prerequisites for the resumption of the political process. "