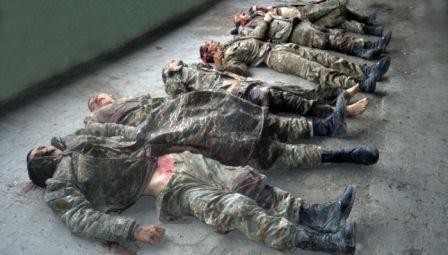 As a result of the military operations carried out in Nagorno-Karabakh on 2-5 April, the Army of the Armenian Republic lost 322 soldiers and officers. More than 500 wounded were reported. The fate of 50 is still unknown.

The Armenian side had once reported the above mentioned information on the number of its casualties, after a while it was deleted from the websites and was forbidden for Mass-Media.

In order to conceal the number of casualties, the Armenian side announced the names of some dead soldiers as `missing`. Even the names of the Armenian fugitives that escaped to Iran were also added to the list of missing soldiers.

In fact, the names of the dead soldiers that are being reported today are the ones killed before April 5, but not after as claimed by Armenian side `.

Some of dead soldiers presented as `missing` buried covertly. The rest of them are still kept in morgues.

Note, despite the agreement on the cessation of hostilities along the contact line, Armenian Armed Forces continue to aggravate the situation. As a result of the skirmish, serviceman of the Azerbaijani Armed Forces, re-enlistee Rustam Ahmedov was killed during the prevention of the sabotage of the Armenian side on the contact line of the two countries’ troops.