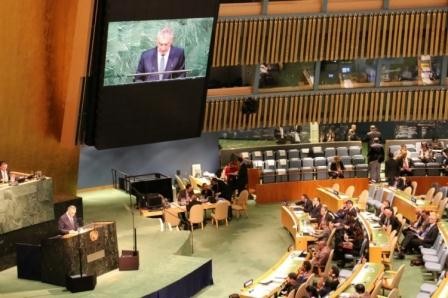 The 30th Special Session of the United Nations General Assembly on the World Drug Problem (UNGASS) is underway in New York City.

At the event, Azerbaijan is represented by a delegation led by Ali Hasanov, Chairman of the State Commission on Combating Drug Abuse and Illicit Drug Trafficking.


Hasanov talked about the role of Azerbaijani authorities in preventing the country’s territories from being used for drug trafficking.


He noted that Armenian armed forces have invaded 20 percent of Azerbaijani territory, causing more than a million Azerbaijanis to become refugees and internally displaced persons.

Armenians continue to grow drugs on the occupied Azerbaijani territories, process them in special laboratories and send to different countries, Hasanov said, adding that Azerbaijan’s law enforcement agencies have collected enough data on this problem and submitted the relevant UN agencies.

The fight against the drug problem is based on the principle of respect for sovereignty and territorial integrity of states, Hasanov said, urging the world community to exert pressure on Armenia for the fulfillment of four UN Security Council resolutions, which demand the immediate withdrawal of Armenian forces from all occupied territories of Azerbaijan.


He added that Azerbaijan will continue to work closely with neighboring and other states on exchange of information and experience in the fight against drug trafficking.