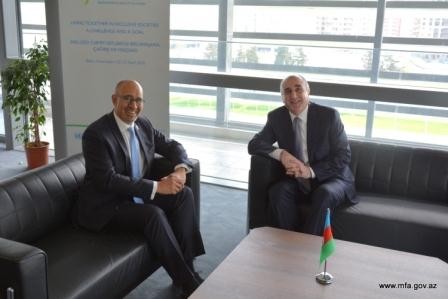 He made the remarks during a meeting with French Secretary of State for European Affairs Harlem Desir on the sidelines of the 7th UNAOC Global Forum in Baku on April 26.

Mammadyarov noted the importance of increasing the efforts by the Minsk Group co-chairs of OSCE on the resolution of the Armenian-Azerbaijani conflict.

Informing about the latest escalation along the line of contact of the armed forces of Armenia and Azerbaijan since 2nd of April, the FM mentioned that Armenia continues to violate the cease-fire with heavy weapons and as a result of which civilian objects in Tartar district were sustained serious damages.

Moreover, the sides exchanged their views on the development of relations between Azerbaijan and France in various fields, noting the importance of the 7th UNAOC Global Forum.