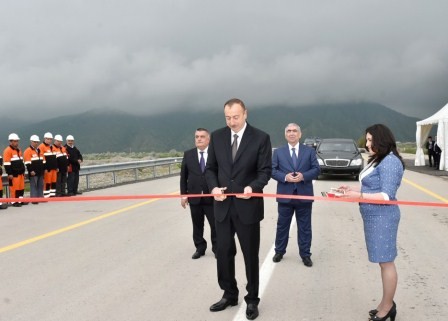 President of the Republic of Azerbaijan Ilham Aliyev has attended the inauguration of the newly-reconstructed Mughanli-Yevlakh part of the Baku-Shamakhi-Yevlakh highway.

The head of state was informed that the total length of the two-lane road section was 115.15 kilometers. The overall width of the road is 12.5 meters, while the lane width is 7.5 meters.

Six bridges were reconstructed, a number of facilities and electrical poles were installed along the road. Thirty-nine bus stops were built here.

The reconstruction of the highway started in March 2010 under the relevant order of President Ilham Aliyev.
The head of state cut the ribbon symbolizing the opening of the road.