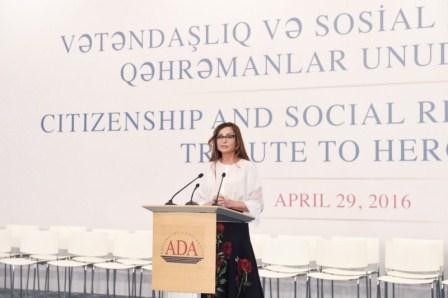 ADA University Commencement ceremony has been held. The ceremony featured the "Citizenship and Social Responsibility: Tribute to Heroes" event.

Academician Roald Sagdeev recalled his meetings with Hafiz Pashayev during his tenure as the first ambassador of the independent Azerbaijan to the US.

"He once told me that his lifelong dream was to found a diplomatic university in Azerbaijan. Today, this dream has come true, and ADA University marks its 10th anniversary," said Sagdeev.

Azerbaijani First Lady Mehriban Aliyeva made a speech at the ceremony. She highlighted what the Azerbaijani government has been doing to develop education.