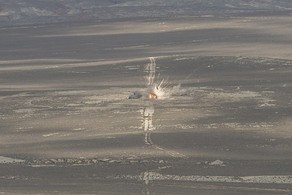 According to the Armenian media, one of killed soldiers was resident of Noyemberyan.

Note that according to reports, this morning Armenian Armed Forces violated ceasefire from different directions of the frontline. In the battles in the direction of Talish village servicemen Garik Movsesyan, born in 1997, and Vazgen Harutyunyan, born in 1968 deadly wounded.

Earlier, the defense minister, Colonel-General Zakir Hasanov who is visiting frontline zone said that the enemy's provocations will be prevented: "As long as Armenians do not leave their occupation policy, says President Ilham Aliyev," the earth must burn under the feet of the enemy " We will not allow the enemy to sit quietly in the occupied territories. That's our goal. "