"Azerbaijan will never reconcile with this situation" 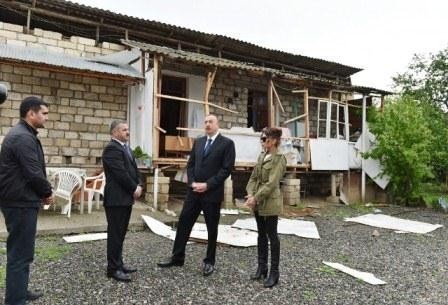 
President of Azerbaijan Ilham Aliyev made the remarks during his visit to frontal districts on May 1.


The head of state noted that early this year, when some progress was observed in negotiations due to rising international pressure on Armenia, the occupying state violated ceasefire early in April and was repulsed by the Azerbaijani army. The president said though Azerbaijan reached ceasefire agreement on April 5, Azerbaijani settlements near the contact line of the troops came under fire on the night of April 27-28.


President Ilham Aliyev mentioned that Azerbaijan will never reconcile with this situation. Saying that the advantage on the line of contact is absolutely on the Azerbaijani side and our positions has been further strengthened, Ilham Aliyev stressed that the comprehensive measures taken by the state regarding army building reached its goal.


Ilham Aliyev said that the Azerbaijani Army gave deserved response to the Armenian provocation. The president emphasized the heroism, courage of the residents of the frontal settlements and their commitment to the land, assessed it as an example of true citizenship stressing the destroyed houses and social facilities will be reconstructed as soon as possible.