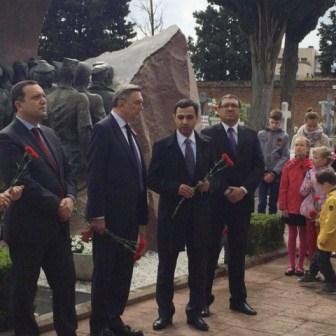 Azerbaijani Ambassador to Spain Anar Maharramov has said his country is protecting its territorial integrity and national interests in compliance with norms and principles of international law. He spoke at a ceremony to mark the 71st anniversary of the Victory over Fascism, which was organized by the Russian Embassy at the Fuencarral Cemetery in Madrid. The ceremony was attended by diplomatic representatives and military attaches of Azerbaijan, Russia, Kazakhstan, Uzbekistan and Armenia.

Maharramov responded to groundless accusations of the Armenian Ambassador, and said that “the people of Azerbaijan were a peace loving nation”. “Azerbaijan pursues an independent policy, and has never laid any territorial claims against any country.”

“We do not want war. We are protecting our sovereignty, territorial integrity, national interests based on the norms and principles of international law. We want peace to be established in our region as soon as possible,” the Ambassador said.

Ambassador Maharramov also highlighted Azerbaijan`s “tremendous” role in the victory over Fascism and Azerbaijanis` valor in the war.