"'Over 280 missiles fell on 17 settlements in Tartar district" 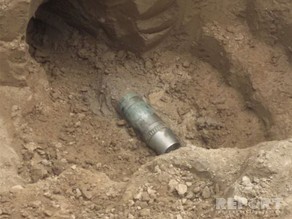 'Over 280 missiles of heavy artillery has fallen on 17 settlements in Tartar region'.

Chief of Tartar District Executive Power Mustagim Mammadov said while giving information to the representatives of diplomatic corps accredited in Azerbaijan regarding current situation on the frontline.

Chief Executive said that officials of Azerbaijan National Agency for Mine Action (ANAMA) have detected and neutralized 59 pieces of unexploded ordnance in these territories: 'Currently, agency's employees carry out search operations and demining activities in the frontline villages'.

M.Mammadov stressed that Armenian armed forces target civilians: 'Armenian constantly fire frontline villages and settlements as well as agricultural lands during planting and irrigation. In addition to heavy artillery weapons, they use internationally banned, poisonous weapons. Yesterday Armenian use of white phosphorus shells once again showed that Armenians try only to harm civilians and carry out their mass destruction'.