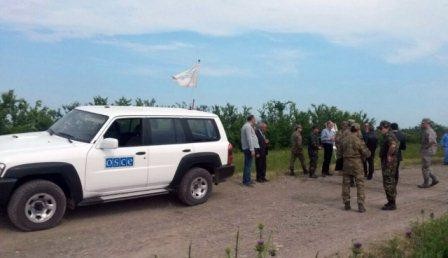 After conducting monitoring on the contact line of the Azerbaijani and Armenian troops, OSCE representatives arrived in the Eskipara village Azerbaijan’s Terter to review the site hit by the prohibited phosphorous artillery shell fired by Armenians.

APA correspondent reported that the field assistants of the OSCE chairman-in-office personal representative Hristo Hristov, Simon Tiller and Special Representative of the Chairperson-in-Office for the South Caucasus Günther Bachler reviewed the site along with foreign military attaches accredited in Azerbaijan.


Military attachés accredited in Azerbaijan have begun their trip to the Terter section of the frontline.

Foreign Ministry and Defense Ministry of Azerbaijan jointly organized a trip of foreign military attaches to Terter’s Eskipara village, where in the course of operations Azerbaijan National Agency for Mine Action (ANAMA) discovered facts proving the use of incendiary weapons by Armenian armed forces. These munitions are prohibited by international conventions. Azerbaijan’s Foreign Ministry is introducing military attaches of foreign embassies accredited in the country to the fact of usage of banned incendiary weapons by Armenia against the Azerbaijani population.


OSCE representatives left for Azerbaijan’s Terter district after conducting monitoring on the contact line near the village of Tapgaragoyunlu of Azerbaijan's Goranboy district.