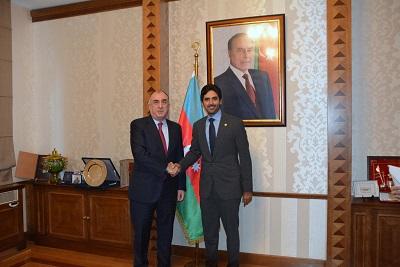 At the meeting satisfaction was expressed over the development of bilateral political relations between Azerbaijan and Qatar and the existing opportunities for the development of cooperation in economic-trade, culture and tourism fields were emphasized.

During the meeting, Ambassador Faisal Abdullah Hamad Abdullah al-Henzab presented a copy of his credentials to Minister Elmar Mammadyarov.

Highly appreciating the cooperation between the State of Qatar and Azerbaijan within international organizations, Mammadyarov expressed his gratitude to Qatar’s side for supporting Azerbaijan’s just position on the settlement of the Armenia-Azerbaijan Nagorno-Karabakh conflict.

Mammadyarov expressed confidence that the ratification of the agreement on the complete abolition of the visa regime for the Qatari citizens will boost the flow of tourists between the two countries.

Ambassador Faisal Abdullah Hamad Abdullah al-Henzab noted that he will spare no efforts to enhance bilateral relations during his diplomatic mission.

The ambassador stated that Qatar always stands by brotherly and friendly Azerbaijani people. Mammadyarov wished to ambassador every success in his diplomatic activities.

During the meeting, the sides exchanged views on issues of mutual interest.