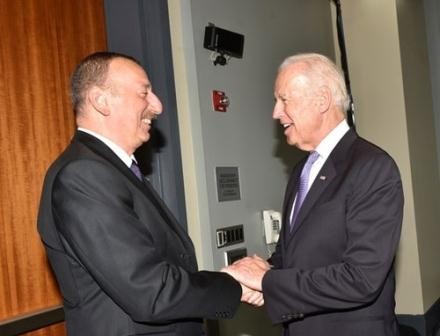 During the conversation the sides discussed the dynamics of the successful development of Azerbaijan-US bilateral relations.


President Ilham Aliyev recalled with satisfaction the meeting held with Joe Biden in Washington at the end of March this year. The Head of State and the US Vice President stressed the effectiveness of the discussions during this meeting. At the same time they have noted the importance of the meetings held recently in Vienna at the initiative of the United States of America on the settlement of Armenian-Azerbaijani Nagorno-Karabakh conflict.


Azerbaijani President Ilham Aliyev noted the importance of a speedy settlement of the conflict in accordance with the norms and principles of international law.

During the conversation the sides exchanged views on the prospects of successfully developing Azerbaijan-US relations.